The bigger they come, the harder they fail…

The last palindromic year for over a century is in the books, and it only remains for me to chuck my two cents in and announce the TC top ten. Hollywood executives are holding their breath – will Snow Dogs make the cut? I think it’s safe to say the answer is not quite going to shake the foundations of the studio system. 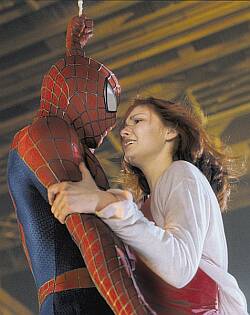 I saw seven of the year’s top ten grossing movies, down one from 2001 – the missed ones were Star Wars II (which I still might catch up with now it’s playing at the IMAX), My Big Fat Greek Wedding, and Goldmember. Last year, two of the top ten made this list, this year’s it’s just one – slightly less than one, actually, for reasons which I’ll get into shortly, and making this more of a Top 9.9 than a Top 10, I suppose. The #1 at the box-office, Spiderman, cracked $400m in the US alone, marking Sam Raimi’s arrival in the super-mainstream. With him and Peter Jackson helming 2002 box-office behemoths, any bets on which former ‘video nasty’ director will be next? Dario Argento? Jorg Buttgereit? Guess we can rule out Lucio Fulci, at least…

Fortunately, peeping under the wire were a couple of pleasant surprises, not least the arrival of Jason Statham as a legitimate British action here in The Transporter. However, to avoid disappointment, I am consciously trying not to get over-excited for any of 2003’s releases, most notably Terminator 3 and The Matrix Reloaded. I figure if I expect less of them, it reduces the chance of unpleasant surprises. 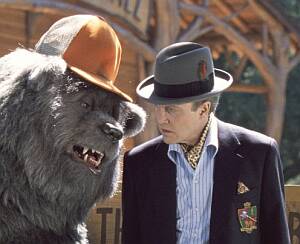 A couple of words to Disney: you suck. You lobby to get the copyright law changed to protect Mickey, while shamelessly raping the public domain for the likes of Treasure Planet, and even pillage your own back catalog, whoring any beloved cartoon you can into straight-to-video sequels. Then, when you get your hands on the best animated film of the year (Spirited Away), you hide it in 151 theatres nationwide, with hardly any publicity – compare TP, which opened in over 3,200 with a marketing blitz, and still tanked.

And while we’re at it, can someone please give Christopher Walken some money? That way, we wouldn’t have to suffer the trauma of seeing one of the finest actors of our generation in stuff like Kangaroo Jack and The Country Bears Movie. Walken wins the Klaus Kinski “Fuck the script, send me the check” Memorial Award for 2002.

#10 – Equilbrium. Sliding in so low under the wire, I’d not even heard of it until the day we saw it, Christian Bale delivers a great performance in a setting that combines the best of Orwell, Huxley and Bradbury.

#9 – Signs. Would have been several notches higher, if not for an ending that would have got a failing grade in your Primary 3 English class. That this disastrous finale doesn’t flush the movie out of here entirely speaks volumes for the quality of the rest of it.

#8 – Jane White is Sick and Twisted. As previously, 2003 had its share of festival hits that, sadly, in all probability we’ll never see again. This maniacal riff on pop culture took homage to undreamt-of depths, in a wild ride through the TV landscape which is the third millenium. A career programming reality shows for the FOX network beckons those responsible. 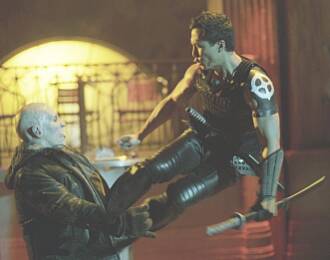 #7 – Blade II. The year’s most unexpectedly-decent sequel was Del Toro’s gory-as-hell take on what is possibly the coolest comic character to hit the screen thus far. Face-splitting, autopsies, and more exploding vamps than you can shake an ultraviolet hand-grenade at, plus Donnie Yen (right) and Wesley himself. Woo-hoo!

#6 – Sum of all Fears. Never having read the book, I had no idea what to expect here, and the Ben Affleck/Harrison Ford thing passed me over entirely. What the makers delivered was the tensest movie of the year; once Baltimore was sacrificed, you got the feeling anything could happen, at any time.

#5 – Minority Report. It’d been a long while since Spielberg had made anything in the pure entertainment line, which is where his fame began, but this delivers the goods. Chalk up another Dick adaptation which bears little resemblance to the book but is still great on its own terms. 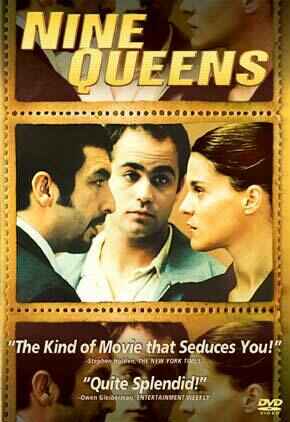 #4 – Spirited Away Hayao Miyazaki is another film-maker who returned to form in 2002. After a few mediocre entries, he got back to what he does best: imaginative story-telling. He creates a wonderful parallel world of amazing characters and visual style.

#3 – Dead Dogs Lie. The best film of 2002 which you won’t have heard of (except here) sends three hitmen on a road trip. Less plot- than incident-driven, it had the sharpest dialogue of the year; here’s hoping someone picks it up for distribution soon. Or else we might have to. 🙂

#2 – The Ring. Just another crappy Hollywood rema…No, hang on, what’s this? It kicks the original’s turgid butt in just about every way, keeping the good and cranking the Creep Factor up to 11. Our son came home from seeing it and started asking if we had any covered wells on the property…

#1 – Nine Queens. Proving that there’s life in David Mamet’s style yet…if not perhaps in David Mamet… A script to treasure, unfolding with precise grace right up until the end. Bordering on a shaggy-dog story, I almost don’t want to see it again, in case it proves less fabulous second time around.