Women in prison films are a cornerstone of trash cinema, but are one whose appeal is difficult to explain. Chris typically sidles her way out of the room when they’re on, looking at me strangely; I think she’s slightly concerned about the sadomasochistic overtones. But, to me, that’s like being concerned about the homosexual overtones of pro wrestling – which is, after all, well-muscled men in skimpy costumes getting all sweaty and grappling each other. Indeed, pro wrestling and WiP films have other aspects in common: both are disparaged critically, packed with larger than life characters, and contain certain standard plot-devices that are almost de riguer for the genre, showing up time after time.

It’s a universal construct too. Not just Hollywood, but anywhere with a low-budget movie industry, the odds are the genre has been mined. Italy? Hong Kong? Japan? Done. The problem comes when censorship or other restrictions limit your ability to deliver on expectations. A decade ago, back when I shared a house with Steve and Abigail, I tried one of their vegan sausages. It wasn’t bad actually – but something less like a real sausage, is hard to imagine. Which brings us to Final Detention, the vegan sausage of women-in-prison films. While not without its entertainment value, something less like a real women-in-prison film than this Thai entry in the genre, is hard to imagine.

It opens with the heroine escaping, for reasons never explained, from two men with guns on a dock. She does so by diving in to the water and clambering onto a nearby boat. Unfortunately, this turns out to be transporting death-row inmates to a remote prison. Its lightly-clad passengers are apparently Al Qaeda terrorists, judging by the fact that they are guarded by an entire posse of men in ski-masks, wielding automatic weapons. Okay, if I was in this film, I’d likely demand anonymity too. Remarkably, the guards are entirely unconcerned by the sudden appearance of an unscheduled, dripping addition to the manifest, and sail on regardless.

On arrival, the women are dumped off-shore, and forced to wade to the beach, which would be a good excuse for their clothes to turn transparent. Not here though. Instead, when they hit the beach, two try to run away, only to find themselves losing a quick game of Minesweeper. Impressively, they appear to evaporate entirely after detonation. Taken to the camp by the traditional queen bitch guard, they pass the equally traditional guard tower – now, this is just a guess, but I’m predicting, here and now, that it will explode by the end of the movie, hurling the guard to the ground. They also pass a row of women tied to crosses (below). “What the hell is this?” asks one inmate – about two seconds after the viewer wonders the same thing. “Hell is what this is,” replies Queen Bitch, which may be the finest moment in the history of translation.

Turns out, this is one of the forms of punishment if you break the rules. The alternative apparently involves being forced to…er, stir the warden’s herbal bath. “You know you are on death row forever?” he says, which would seem to negate the point of death row somewhat. Similarly, Queen Bitch tells the new meat, “We’re here so we can correct your behavior. You’ll all be perfect women.” It’s nice to see Thailand adopt a kinder, gentler approach to capital punishment, aimed at rehabilitating the condemned before presumably killing them. The new inmates are taken to the showers. While a fire-hose is involved, the kinder, gentler guard lets them keep their clothes on.

The prison uniforms are pretty neat: little midriff-baring combos, appropriate for a safari excursion – or death row- causing Top Dog Inmate to drool quietly over the new arrivals. This concerns her current pals, who have their worries dismissed with “You’re too talkative. Keep on massaging.” I swear, I will work this line in to my next corporate meeting somehow. 16 minutes in, we finally learn the names of two characters, both called after desperation late moves from a Words With Friends game. “Am” is a new arrival – I sense this could cause grammatical issues later on – while Wan is an Old Hand in the prison.

Security is kinda lax here. And by “lax”, I mean “entirely on the honour system”. An inmate asks the guard to go to the bathroom, and that’s all she needs to do, in order to sneak out and snog her boyfriend. The guard appears incredibly surprised when she doesn’t come back. Top Dog makes a play for Am, but Wan stops her, causing Top Dog to storm off in a huff. We also learn that those who try to escape are buried in the ground up to their neck, while the new inmates do aerobics and clamber through what appears to be a Women of Ninja Warrior course.

It’s all too much for one, who is taken to the infirmary. Turns out she’s a drug addict who’s going through cold turkey. The treatment for this deserves quoting in full:

“Tie her up in the water and give her some herbs.”
“Isn’t that a bit dangerous, sir?”
“What choice do we have?”

Er, not tying her up in the water and giving her some herbs? Just a suggestion. Top Dog still has her eye on Am, but Wan has her back, and a slap-fight ensues, until Queen Bitch breaks it up, and orders the new inmates to sleep outside for the night. There, they bond over touching stories, such as:

“Is your sister addicted to drugs too?”
“No. She went insane after she got raped.”
“Terrible. Men that rape women should be killed, and rot in hell.”
“I cut their dicks off.”
“Yeah! Great! They deserved it.”

Um, about that “rehabilitation”… We discover the island is run by Commander Chart. He is apparently, “an ex-soldier, a dictator and some say insane.” Any of those would certainly explain his hobby of shooting buried women in the head, accompanied by overwrought, sepia flashbacks to his time in the army. But he has to answer to Madam Pornpimol, even if her oversight consists of a 30-second video phone-call inquiring politely about progress, and telling him, “Keep healing them. Don’t use violence. It may affect my votes.” Politicians, eh? They’re all the same.

Top Dog is unhappy with the food, and asks for more. Impressively, the response is, “You won’t finish it. If you want more, come back for it.” Say what you like about Thai prisons, the all-you-can-eat buffet approach is certainly novel. When she tries to sit next to Am and Wan, another fight occurs, and this one has to be broken up by the Commander and Queen Bitch. He rounds up the troublemakers, takes them outside and yells at them through an entirely unnecessary megaphone – they’re maybe 25 feet away – “If you can’t get along then fight! Fight to the death! Fight until one of you dies!”

So much for “Don’t use violence,” I guess. Admittedly, given the combat skills on display, old age is probably a bigger threat to life and limb for the combatants, even after every other prisoner joins in, apparently realizing this could take a while. For variety, the Commander turns a fire-hose on them, perhaps hoping one will accidentally drown. It doesn’t help, and he has to commute the death-match sentence to “Let them sleep here.”

The inmates hard labour consists largely of prodding rocks unenthusiastically with tools. Madam calls up requesting “well-behaved” inmates for a press conference. This rules out the one who embeds a pick-axe in the back of a guard, triggering an escape attempt. “Hunt them down!” snarls the Commander during his chat with Madam, forgetting that this thing is indeed on, and provides the Worst Explanation Ever of what he meant: “Hunt is just the word we use. It encourages prisoners to work happily. It’s not a real hunt.” Maybe all that’s needed to prevent escapes is to point out to the inmates that this is a remote island? It would certainly save the need to build the elaborate pits and other traps into which the escapees manage to stumble (as shown below, right).

These executions are the final straw for the inmates, who begin to plot a revolt while tied to the crosses: “The only thing here is death – we have to get out.”  The next day, the women wander the island and see one of their co-inmates being held upside down by two guards, while another two beat the soles of her feet. In what may be the understatement of the year, their sole reaction is, “It’s very strange here, isn’t it?” No shit, sister. A slightly-better planned escape is planned, scheduled to coincide with the monthly return of the boat.

The plan appears to be to distract the Commander with a fully-clothed table-dance to Stardust’s Music Sounds Better With You. One wonders whether the band gave permission for this; I’m thinking not.  Somehow, this succeeds, and the others overpower the guards at the arms storehouse so easily, you have to ask why they didn’t try earlier. They blow up the guard-dogs(!), which loses them the element of surprise, and a largely bloodless battle commences. As predicted, the guard towers explode, though in a startling deviation from convention, there is no guard seen falling through the air and out of shot.

The Commander vows to hunt down all the survivors, who easily take the boat, thanks to the ski-mask clad guards falling for the old “underwear-sporting woman running towards you” ploy.  However, the Commander blows it up with a contender for the worst digital explosion ever, though he himself is shot by an inmate, who is then shot too. Basically, just about everyone dies. I trust I haven’t spoiled it for you. But here’s the last ten minutes, in all its unsubbed, insane glory, which will demonstrate its Incredibly Bad credentials, much better than my 1,700 words ever could. 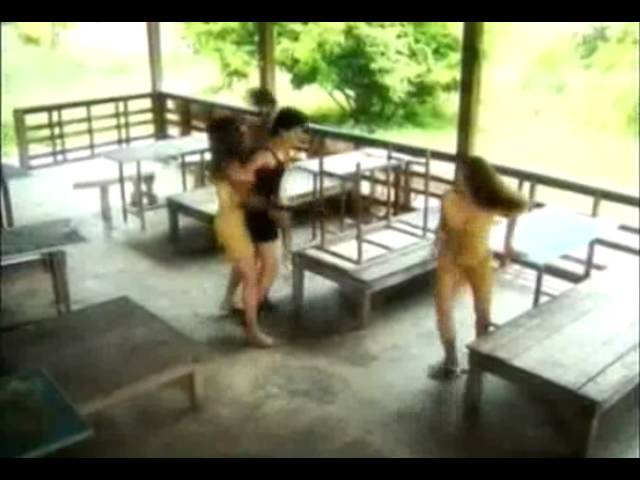