In which we finally found the answer to the question,
“What Is The Matrix?” 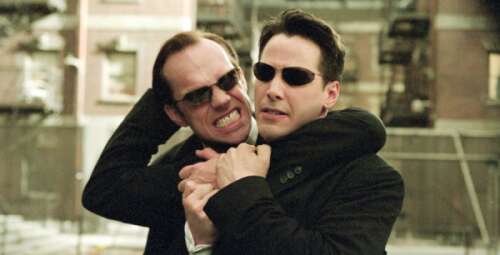 Saw six of the top ten grossing movies in 2003 – as is traditional, the success of most of the rest left me shaking my head at the interests and desires of the average American cinema-goer: Bruce Almighty, Chicago, Bad Boys II, though I might catch Elf eventually. At least Bruce and Elf were original ideas, something hugely lacking this year. If we look at the top twenty films, three-quarters were sequels, remakes or adaptations. Perhaps we should let Return of the King off with a caution, even if it falls into two of those categories. 😉

Perhaps the biggest news was the way the Matrix franchise crashed and burned, from a position at the start of the year as the most-bankable thing in Hollywood. Truth be told, Revolutions isn’t that bad, but was largely scorched by the huge disappointment which was Reloaded. Despite the success of Lord of the Rings, studios might well go back to making most movies one at a time, then waiting to see whether the audience actually wants more. 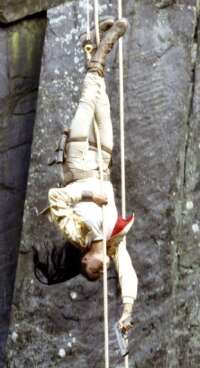 There were several other cases this year where the audience stayed away: the Charlie’s Angels, Tomb Raider (left) and Fast and the Furious sequels all underperformed. But X2, Spy Kids 3-D and Scary Movie 3 did well, so sadly, we can’t proclaim the quick cash-in dead. Save X2, it was a poor year for comic-book movies: Daredevil disappointed, The Hulk collapsed after a strong opening, while LXG ranks amongst the year’s top turkeys. 2004 brings Spiderman 2, which looks a good bet, but the prospects for Hellboy are much less certain.

Outside of Hollywood, the usually-reliable Phoenix Film Festival, which produced two top ten entries in 2002, didn’t manage anything of especial note – we hope for a return to form in 2004. The main source of interest this year was Korea: while Guns & Talks was the best, My Wife is Gangster and Attack the Gas Station! are also worth watching, and animated feature Wonderful Days currently lurks in the unwatched pile. Hong Kong had a bit of a return to form, Infernal Affairs just beating Double Vision in our view, and making a worthy Oscar contender.

#10 – Infernal Affairs. The most solidly-acted movie to come out of Hong Kong in a while, thanks to Andy Lau, Anthony Wong and Tony Leung. A lot of effort is put into building tension, and it really pays off with the end result likely to leave you with a good working knowledge about the edge of your seat. 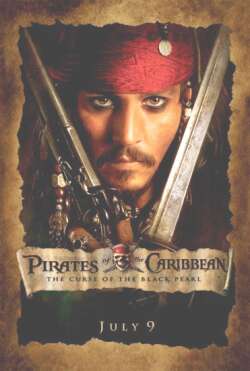 #9 – Pirates of the Caribbean. Bloated, excessive, mammoth. In other words, a perfect popcorn vehicle, whose appeal rests largely on Johnny Depp’s wonderful performance (he can collect the TC 2004 Best Actor, should he ever be in Arizona). He resurrected the previously-dead swashbuckler genre single-handed.

#8 – Synthetic Truth. Okay, I’m (heavily) biased. And Lord of the Rings it isn’t. But for $3,000, you won’t see a better hundred minutes of cinema this year – despite my performance! An early prediction: the 2018 Oscar for Best Director goes to…Zachary Yoshioka.

#7 – The Princess Blade. Possessing swordfights almost the equal of Kill Bill, courtesy of Donnie Yen’s fight choreography, this also had an excellent scenario, its futuristic setting contrasting nicely with the samurai characters. Undeniably Japanese in style, yet easily accessible to a Western audience.

#6 – Guns & Talks. Okay, this was technically released in November 2002, but is simply too good to leave off. Never has the life of a hitman been so appealing – assassins are people too, y’know. An inferior Hollywood remake is probably inevitable.

#5 – Kill Bill, Volume One. If you’d told me a Quentin Tarantino film would be in my Top 10, I’d have laughed. But this one fully deserved it, even if, in truth, it was only half a movie, with the most arterial mayhem seen on screen for a long time. Roll on Volume 2!

#4 – The Returner. Proof that the best wine comes in old bottles, this offered some lovely twists on The Terminator and The Fifth Element, with better characters than either. Add plenty of style, and a great villain too; the end product was simply highly entertaining.

#3 – The Animatrix. 2003 will not go down as a banner year for the Wachowskis; they should probably have stopped with Animatrix, which had far more depth and imagination than Reloaded and Revolutions combined. Beautifully animated, with every part leaving you wanting more, unlike the live-action films. 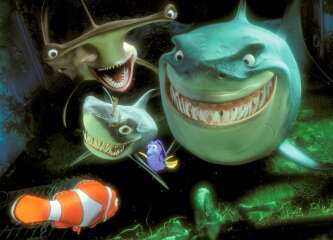 #2 – Finding Nemo. Walt who? If there was any doubt over who’s the #1 American animation studio, this dispels it, thanks largely to Ellen De Generes giving the best female performance of the year as Dory, the short-memoried fish with a heart of gold. Perfect animation, great characters, wonderful writing.

#1 – Lord of the Rings: Return of the King. You’ll laugh, you’ll cry, you’ll sit with jaw agape. Countless man-years and $300m in the making, with every minute and penny fully justified by this climax to the trilogy. This raises the technical bar for every other movie, while not forgetting that it’s the people (and elves, dwarves and hobbits) that count.

What are we looking forward to in 2004? Nothing pre-dominates in the way that Matrix and LotR did for 2003. Looks like more sequels are in order, but some might actually be worth our time. In no particular order: Kill Bill, Vol. 2, The Chronicles of Riddick, Van Helsing, Alien vs. Predator, Resident Evil 2, Ultraviolet (about vamps, but nothing to do with the C4 series), Constantine, The Day After Tomorrow, Blade: Trinity and The Incredibles. Some of these will suck. 🙂 And speaking of “suck”, file under “wild horses”: Shrek 2 and Scooby-Doo 2…