Where Have All The Hobbits Gone?

Funny how a year changes things. This time in 2004, I was looking forward to Van Helsing and Alien vs. Predator – laugh? Why I oughta… – while the odds of Shrek 2 making it into my top ten for the year seemed slim at best. Okay, it still didn’t quite get there, but it came a damn sight closer than expected. And we’re still waiting for Constantine (now a February 2005 release) and Ultraviolet, which is vaguely scheduled for August. 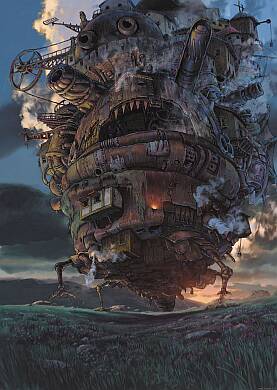 But enough about films that didn’t come out. I saw seven of the top ten grossing films, the exceptions being The Bourne Supremacy, Shark Tale and Troy. The middle-named wins the 2004 TC “why is anyone going to watch this?” award, replacing last year’s champion, Bruce Almighty. Again, the usual mix of sequels and adaptations (or both, in the case of Bourne) ruled, with The Incredibles beating Shark Tale in the Most Successful Original Story category. Is animation the last refuge of imagination these days? [Best animated film of 2005: Howl’s Moving Castle (right – click on the pic to see all the luscious detail). Hey, it’s Miyazaki, so I’m not exactly going out on a limb]

It’s kinda odd to find Christmas rolling around, without a Lord of the Rings movie to see, though sure many of you will find the extended version of Return of the King in your stocking come Christmas morning. [The bad news is, of the 50 extra minutes, 48 of them are additional footage of hobbits hugging each other goodbye…] One thing this will do, is make the Academy Awards a lot less interesting. After last year’s Middle Earth domination, we’ll be back to the usual worthy-but-dull dramas, with the odds strongly against any of our favourites even getting a nod, never mind a statuette. We’ll just have to wait for the mainstream breakthrough of the next former splatter-movie director. Alex Chandon, now is your hour…

Here’s our top ten choices for 2004 – but, first, a few honorary mentions for others we enjoyed over the past year, in no particular order: The Cooler, The Great American Snuff Movie, Touching The Void, Mean Girls, Ginger Snaps 2: Unleashed. Shrek 2, The Hazing, and Resident Evil: Apocalypse. 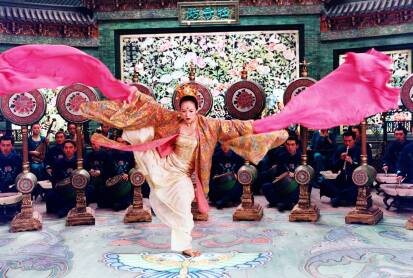 #10 – House of Flying Daggers [review on gwg.org]. Okay, it’s not quite Crouching Tiger, though it desperately wants to be, but it still had the best action sequences of the year, and some of the best cinematography as well. Fluid moviemaking, the art of which seems lost to Hollywood.

#9 – Kill Bill, Volume 2 [review on gwg.org]. Not quite as good as part one, it looked like Tarantino didn’t quite keep his self-indulgence in check. But when it worked – and, for the most part, it did – it really worked. Uma Thurman’s revenge mission continued, with more style, grace, violence and irritatingly-hip dialogue than you could ever want.

#8 – The Chronicles of Riddick. A tremendously guilty pleasure, taking me back to the days when I’d haunt the SF section of my local library, devouring even the pulpiest trash with abandon. Ludicrous, overblown, nonsensical. But enjoyable as hell, with Vin Diesel proving why he’s the ultimate bad-ass, even though his acting ability is questionable, at best.

#7 – Up For Grabs. It was a good year for documentaries, though you won’t find Moore’s polemic rant listed here (post-election, it seems an irrelevance). Instead, here’s a film about a baseball, and the struggle for possession of it. And yet, it’s a metaphor for all human exis…oh, who am I trying to kid. But in the light of the increasing damning evidence for Bonds’ steroid use, this gets even funnier.

#6 – The Incredibles. Another year, another Pixar production. Another top 10 spot. But this spot is actually a drop, after two consecutive #2’s. Still funny, still intelligent, even more action-packed than its predecessors, it did feel a little lacking in heart – but only in comparison to their other masterpieces. By any other standard, this was an instant classic.

#5 – Aileen: The Life and Death of a Serial Killer. Nick Broomfield is the best documentarian currently working, – Michael Moore isn’t fit to load his camera. This creepy follow up to his early film about serial killer Aileen Wuornos finishes the story by covering the days up to her execution with an unflinching, neutral eye. Both those pro- and anti- the death penalty will find much food for thought here.

#4 – Noon Blue Apples. Ah, conspiracies. Yet while The Da Vinci Code film gets all the press, it’ll be hard pushed to capture the paranoid anxiety of those who delve into the world of secret and forbidden knowledge. That’s something Noon does almost perfectly, and your head will be spinning like a top by the time you get out. If you do…

#3 – Aan: Men at Work. Certainly the biggest surprise of the year, who’d have thought our first-ever excursion into Bollywood would make this list? We certainly didn’t, and were delighted to find a fabulous mix of influences, hot bullet-squibbing, martial arts action and – of course – song and dance numbers. If Korea is the new Hong Kong, cinematically, India is the new Korea… 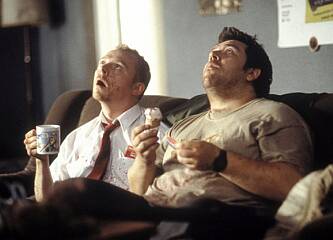 #2 – Bloody Mallory. Lions’ Gate have been sitting on this one for at least two years, but I’m damned if I’m going to let it be ignored any longer. Sure, it’s not technically a 2004 release, but it should have been, so I’m including it here (hey, it’s my top 10!). Go to Ebay right now, and get one of the unofficial copies. For energetic, imaginative, visually striking horror-action, this is the best film since Blade II at the very least.

#1 – Shaun of the Dead. The first British film to win the coveted #1 spot, Shaun not only lived up to all expectations, it surpassed them. You’d have to go back a very long way (Evil Dead 2? Re-Animator? Brain Dead?) to find a horror/comedy that worked so well on both sides of the slash. Repeat viewing makes it even better: seen it three times already, and that’s before getting the DVD. Now, can I get any of you cunts a drink?

Vague plan for 2005, is perhaps to get round to updating the Trash City Top 50 Films. It’s been five years since the last time this was done, so it’s well past due. Though since this task will likely need to involve re-viewing all the current candidates, plus any new contenders, it’s obviously going to be a lengthy, if unquestionably pleasurable, operation. Of course, normal viewing of new movies will also continue!