Does Wendy James wear knickers or not? Those of you who saw BBC1’s “Going Live!” on April 13th will have seen Bendy Wendy perform Transvision Vamp’s latest single (since she’s always careful not to exploit her body, I must have been hallucinating when I saw her clad in a skirt so short it barely covered her panties, grinding her crotch at the camera, stroking her inner thighs and squeezing her small-but-perfectly-formed breasts – ditto, the cover of The Face magazine, which had Wendy just-about wearing bits of a coat-hanger). There followed this interesting exchange with presenter Sarah Greene:

SG: Do all your knickers match your frocks?

WJ: No, I don’t usually wear them.

SG: <Long pause> You’re not scared about catching cold then?

[2020 update: God bless YouTube for preserving the above conversation] 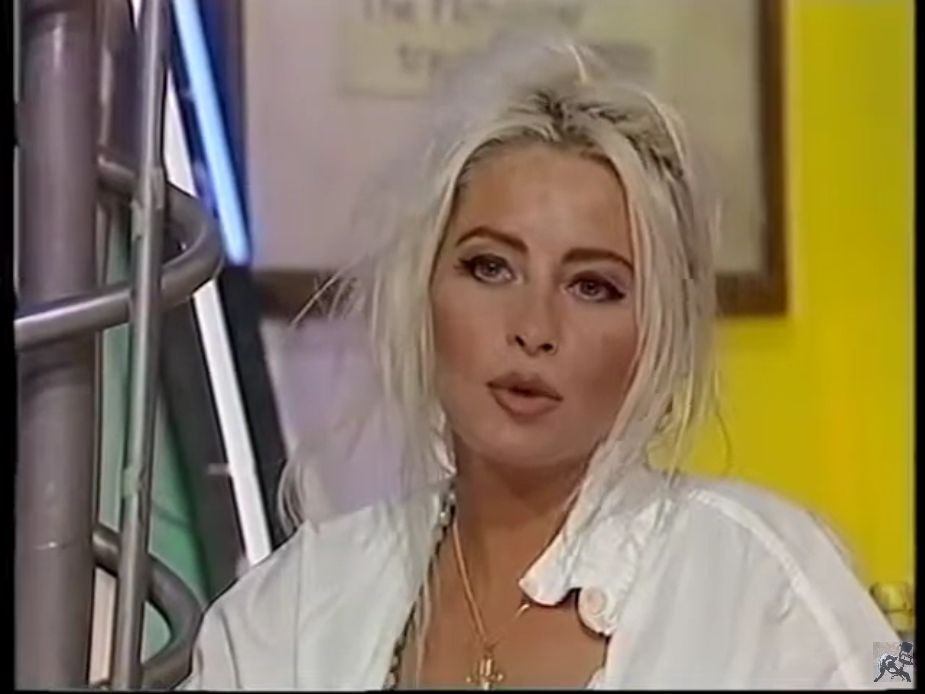 In the investigative spirit for which TC is famed, I’ll be going to see Transvision Vamp in concert before next issue and will be down at the front checking to see just how natural a blonde Wendy really is…

One final tweak to the top 10 films of 1990, following Xmas viewing. ‘Meet the Feebles’ doesn’t stand up to repeated viewing so is replaced by ‘In the Line of Duty 4’, which gets better on reviewing. And a comic book to recommend: ‘Squeak the Mouse’, Tom & Jerry crossed with every splatter movie you’ve seen. It was recommended to me some time ago by a reader (can’t remember who!) but it’s taken a while to get hold of a copy, since Customs seem to have been great fans of it… ‘Meet the Applegates’ did indeed improve on a second viewing – while it’s still no ‘Heathers’, it’s a neat little movie. I saw a trailer for Michael Lehmann’s next film, ‘Hudson Hawke’ recently: I’m not overly optimistic…

Next issue: I feel something Oriental creeping on. It’ll have been four issues (= a year [near enough!]) since the last one, so it seems a good time to loose my predilection for lingerie-clad Japanese gothettes. Precisely what this means for TC remains to be seen. It’ll probably involve a cold shower or two.

Thanks are due to Steve Rag, Dan Pydynkowski, Graf Hauser and Claire Blamey (all of whom have been feeding my NK obsession), Andy Waller, Paul Higson, Helen McCarthy, Stefan Kwiatkowski, Anthony Cawood, George Houston, John from Barlaston, Jay Felton, Tim Paxton, Damien Drake and Steve Moss. Congratulations to Fantasynopsis and Imaginator for taking the top places in Samhain’s ‘zine poll – definitely worthy winners. TC8 was available from Forbidden Planet, Fantasy Inn and Psychotronic Videos, London, plus Videodrom, Berlin and Forbidden Planet, Cardiff – maybe the last named will get round to paying me for the issues I sent them at some point?

Silence of the Lambs – Jonathan (Married to the Mob) Demme directs the adaptation of Thomas Harris’ excellent novel of the same name. Anthony Hopkins and Jodie Foster star as psychopath and trainee FBI agent respectively. Sounds like a strange combination? Well, it works brilliantly: Hopkins will win next year’s Best Actor and the film will be nominated for Best Film. The story concerns Hannibal Lecter (Hopkins), a psychiatrist turned psychopath incarcerated in a top security mental institution – Clarice Sterling (Foster) is used to try and gain Lester’s help on the case of ‘Buffalo Bill’, a serial killer who skins his female victims. The most terrifying thing in the film (and the book) is the interplay between Sterling and Lecter – Hopkins is just totally charismatic as the too-intelligent-to-be-sane psychopath and plays Lecter to perfection. Honestly, the film haunts me even while I’m writing this… 10/10. (AC)