or “Life’s a bitch, and so’s Michaella Strachan”.

Next year is 1992, when Britain, despite Mrs.T’s best efforts, will become more closely linked to the rest of the European community. Trade barriers will be lowered, frontier restrictions will be eased and we can will hopefully see more cross-cultural pollination, ideally in the form of large packs of French schoolgirls roaming the streets.

But there’s a down side to pay: it’s not all sexy game shows and a glimpse of the cost was provided by the 5th annual Diamond Awards, broadcast in the early hours of Sunday, February 17th on ITV. This four-hour spectacular, recorded in Antwerp in front of an audience of 18,000 hysterical Belgians, celebrates the genre of Europop by giving awards to the artists whose records sold the most the previous year and giving the artists a free plug. In theory, it sounds ok; after all a lot of my favourite acts are from the continent – Front 242, Claudia Brucken, Laibach, Yello – so it looked promising.

I missed the first few minutes: I’d got bored about 30 seconds into the edition of ‘After Dark’ I was watching, as is normal (only they could take a topic like ‘Addicted to Sex?’ and make it duller than ditch-water) and went to brush my teeth. Coming out of the bathroom, I heard the strains of “I Think We’re Alone Now” coming from downstairs so returned to the living room to see one moderately ugly female miming badly to the song. Now, to one who remembers Tiffany as a kinda cute teenager, unspoiled by success and who even had the guts to sing live on ‘Top of the Pops’, this was a shock. Dyed hair, and it looked as if her plastic surgeon had bought a job-lot of all the bits Cher’s got rid of over the past ten years. 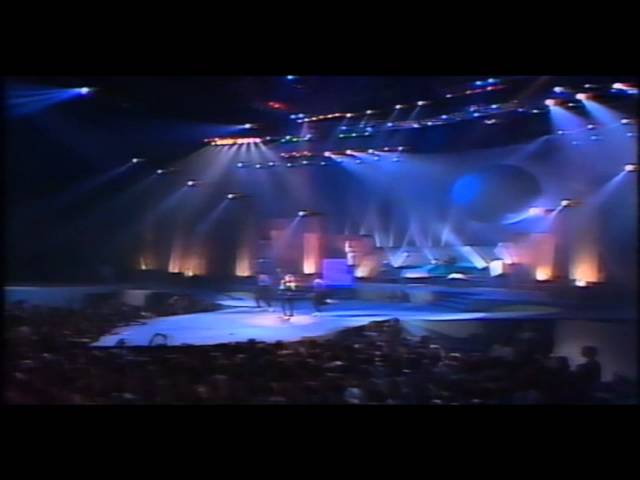 The format of the show became clear: the act sang their ‘greatest hit’, got their award and then sang their current single. There were a few exceptions to this rule: Kylie Minogue (above) got to do three songs, as did a group I’ve never heard of called London Beat. On the other hand, Timmy Mallett (the presenter of the show raved about “his talent, his humour, his creativity” – surely some mistake here?) was restricted to one song: whether this was on the grounds of taste or because at the time this show was recorded Bombalurina had only recorded one is not known.

Perhaps surprisingly, this was actually something of a pity. Whatever one can say about the music, he was accompanied by two of the prettier backing singers that appeared in the course of the programme, which ensured that the entire song was viewed with deep interest, rather than being fast forwarded as soon as it was clear a) the music was crap and b) there were no cutey-pies to be seen. This happened to a majority of the acts: Kylie lasted about half a minute, though this at least 29.5 seconds of this was due to the black PVC dress she was wearing. Jason Donovan was remote-controlled out before he could even appear on the stage and Jimmy Sommerville lasted about as long, though some sick puppy at ITV chose the advert break which immediately followed Jimmy to insert the only National Aids Helpline public information films of the night…

There was definitely something of an air of history about the proceedings, with a large number of the acts “has-beens” as far as this country is concerned: apart from Tiffany, Duran Duran fall into this category, as does Holly Johnson but most spectacular of the wrinklies was Helen Schapiro: “Walking Back to Happiness” was apparently a big hit in Europe in 1990, a mere 30 years after it hit the British charts. Even the new acts didn’t seem to have very much originality, with Irish band Something Else sounding more like Supertramp without the squeaky vocals. 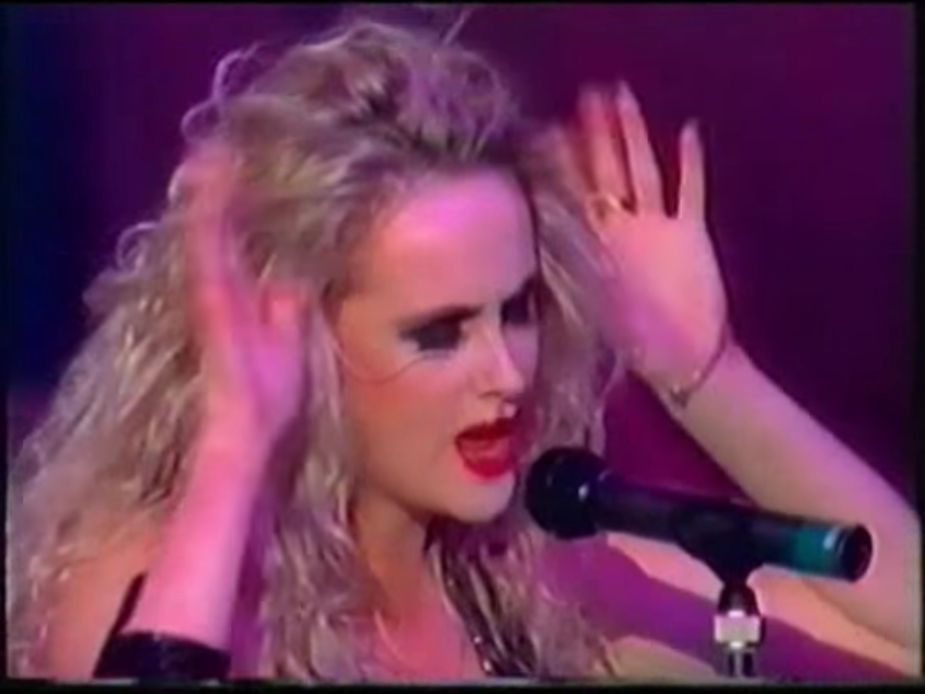 Trust The Human League (above) to come up with something bizarre. Bonus points go to both their bimbos, Suzanne Sulley for looking highly droolworthy + stealing Kylie Minogue’s thunder by wearing PVC a good two hours before the girl from Oz, and Joanne Catherall for bravely performing despite a broken arm, subtly concealed inside a silver lam‚ sling which was easily mistakeable for a particular flashy shirt-collar. Other highlights, though for non-musical reasons, included Technotronic, who at least attempted to sing rather than mime (at least I hope so because if their records sound as bad, we’re in worse trouble than I thought) and Roch Voisine, a Canadian who managed to get the crowd waving from side to side holding lighters in the air: despite this, the Incinerated Belgian Quotient remained low.

Over the entire four hours of it, there were three new acts I might like to see more of: Twenty 4 Seven (harmless, catchy Eurodisco), Beverley Craven (a cross between Kate Bush and Judie Tzuke) and Joelle Ursull – she was France’s entry in last year’s Eurovision Song Contest and came second, but her songs had an infectious, carnival rhythm to them. Of course, being a former Miss Guadaloupe is of no relevance at all. At the other end, Totto Cotunno, the 1990 winner was also there with “Insieme 1992” – as you may remember, the contest this year was dominated by lots of songs about the unification of Europe with “Nineteen ninety, Europe unite-ee” lyrics. And in the “whatever-happened-to” section, there was David Hasselhoff. Yes, that one – David “Knight Rider” Hasselhoff, whose single “Crazy for You” sold three million copies in Germany. He sings every bit as good as he acted…

All of this, coupled with presenter Desiree Nosbusch’s tendency to speak a language that was like English, except with no sense of idiom, meant that by the end of the four hours I was ready to bomb the Channel Tunnel and stage a military coup to pull us out of Europe and prevent Britain’s musical identity from being submerged beneath a tidal wave of Europap.

Then I saw ‘The Hitman and Her’. and now, as far as I’m concerned, the sooner we unite the better.

A brief precis of the idea behind this programme might be useful, for those people who have better things to do at 04:10 on a Sunday morning. Take a nightclub, any nightclub – Mr. Smith’s in Warrington will do. Fill it with people by the simple method of sending out free tickets to anyone you can think of (even I was sent ten once – I did like the idea of going along to sabotage the event, but unfortunately it was in Brechin [on the coast between Dundee and Aberdeen, in case you were wondering] and I was in London). Now, when you have somewhere like that full of the sort of Darrens and Sharons who frequent such places, the sensible thing to do would be to lock all the doors and pop a couple of incendiaries through the window. Not ITV. They play records and make an hour-long programme consisting of shots of people dancing – it’s like Top of the Pops with the groups removed. There’s also a section where they haul people out of the audience and ask them where they bought their clothes.

It’s all so happy and cheerful and everyone’s enjoying themselves, although the combined IQ of those present is probably exceeded by your average digital watch. But even if you’re not worried about the exploitation of the educationally subnormal, Michaella Strachan and Pete Waterman who present it (respectively, her and the Hitman) will succeed in sending the most extrovert optimist out for a sick-bag. While I’m quite prepared to admit that Ms.Strachan is cute and Mr.Waterman knows something about record production, I’m at a bit of a loss to see why this should per se make them any good as commentators at a cattle-market. It’s probably part of the trend towards making presenters so inept that even the most tedious guest appears a master of wit and charm next to them.

This reached it’s ultimate extreme in ‘The Word’, fronted by Amammary de Cadanet (though I can’t comment on her abilities since I’ve been unable to concentrate on what she says for more than five seconds without being distracted by a cleavage in which you could conceal several battalions of the Republican Guard) and Terry Christian, who has been described as “the unthinking woman’s crumpet” on the reasonable grounds that he is about as coherent as most things you find in a baker’s window and could thus be replaced by a chocolate eclair with no detrimental effect on the program.

After about 50 minutes or so of forced jollity relieved only by certain cameramen tending to zoom down blouses or up skirts in a manner reminscent of a Russ Meyer movie, I gave up. On the balance of that evening’s viewing, although there are certain continental commodities I am not looking forward to receiving, I still reckon European union is a good thing. But can we please send Timmy Mallett on a very long, extremely slow European tour, and swap Michaella Strachan for Desiree Nosbusch first?