I knew “something” was in the air for my 33rd birthday last Friday — but I just didn’t know what. I had suspicions that it involved girlfriend Chris flying across from America; she was mysteriously ‘out of town’, but her phone calls that day didn’t have the usual trans-Atlantic tinniness, and a couple of odd comments about the surprise being in my arms suggested much the same. But even after putting on the supplied white tuxedo jacket, bow-tie, and getting into the waiting cab, I was largely in the dark. Hints about 007 had been dropped by Chris, but that covered pretty much everything from sky-diving to a wrestling bout with Famke Janssen.

We drove up into Mayfair — was it going to be a casino trip? — then pulled up outside the Dover Street Wine Bar, where the driver left me in the tender care of the receptionists, who made bravely desperate attempts to delay me by waving jazz programmes under my jaundiced eye. Luckily for both them and me, I was eventually ushered downstairs, by now fairly certain that I was going to see Chris sitting at a table in the corner.

Yes, and in a very real sense, no. Table: correct. Corner: spot on, there. However rather than Chris, the long table was groaning under the burden of friends from all walks of life: work, home, ‘zinedom, the Net, TaB. To say I was gobsmacked was a massive understatement. The words “done up like a kipper” come to mind. Taking my place at one end of the table, in front of a pile of cards and gifts, it was only then that I noticed the Bond theme playing in the background…

Though I soon settled into chatting, drinking and consuming some interesting Bond-related chocolate novelties [watches, guns, bombs and handcuffs], there was one obvious absentee – Chris. However, the suspiciously empty chair, none too carefully concealed a couple of notches to the right did suggest she was still lurking somewhere behind the scenes. From past experience I know of her fondness for surprise parties, and I was fairly sure she wouldn’t want to miss out on the fun.

Indeed, I was still reeling from the shock, though I had at least started to socialise, when Chris turned up…on the arm of someone who looked uncannily like Pierce Brosnan, for reasons which would become clear in due course. Also appearing was a pseudo-‘M’, who proceeded to deliver a briefing which covered pretty much my entire life history and interests, and which has either elevated my reputation among my friends to a godlike level, or destroyed it utterly. I’m still not QUITE sure which, but it was highly amusing anyway! [For those who weren’t there, or were too busy pouring wine down their throats, the script for the briefing is available]

At the end of it, there was a brief opportunity for Chris (aka Dolly Bird, clad in an amazing black dress) and myself to “re-acquaint” ourselves with each other. The temptation to just sneak off together at that point was manfully resisted, and we returned to the table, where the party could now begin in earnest. Wine flowed freely, and the food was excellent — smoked salmon, chicken and chocolate mousse gateau in my case, though there were other choices available.

The magnitude and intricacy of the planning on display was awesome: the guest list had been drawn up from a mass email I’d done (hence the somewhat work-related bias to the list) with Chris mailing the other recipients and working from there. She’d been assisted in her endeavours by Caroline (aka ‘M’), a professional at this sort of party-planning thing, and it was her who brought in ‘Pierce’ — actually Douglas James, in real life (or, at least, the cinematic variety thereof!) Brosnan’s stand-in and stunt double. It had all worked quite perfectly, with no-one breathing a word to me, and everything going off almost like clockwork, despite the distance involved. The only major problem was Chris’s luggage not turning up until the following day, necessitating a frantic afternoon’s shopping to re-acquire the essentials.

Some of the guests had also gone way beyond the call of duty; a special credit goes to Pete Clark in his “Dr.Evil” get-up of bald cap, monocle and stuffed toy cat. He was totally unrecognisable: indeed, my first thought was that it was some kind of Care in the Community project involving the mentally ill. Strange how compelling his costume was though, during the course of the evening many sad individuals – including me, of course – felt the need to try it on. Doug with his (literal) Goldfinger was also worthy of mention, and left no orifice within reach unfingered…

Throughout the evening, disposable cameras (provided by Chris) flashed merrily, and you can see some of the results on this page. But all good things must eventually come to an end, and as midnight approached, the guests, stuffed with chocolate, began to drift away. A hard-core (Hi, Simon! Hi, Mark!) opted to move on to other pastures, but myself and Chris had other things on our mind…and at this point, let’s draw a discreet veil over proceedings!

This was just the start of a wonderful weekend, which will stay in my mind forever. Inflatable Hello Kittys, nailbombs and the contraceptive effects of chicken parmigiana would all play their part, though perhaps some things had better be saved for my autobiography! Thanks go to everyone who attended, commiserations to those who couldn’t, who missed a GREAT night, with particular thanks to Caroline and Douglas for their roles. Plus, of course, above all, to Chris for proving once again why I am the luckiest man in the world… 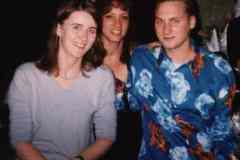 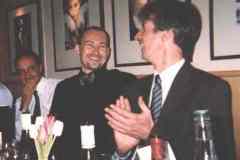 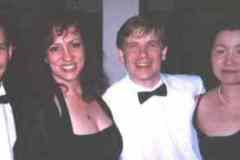 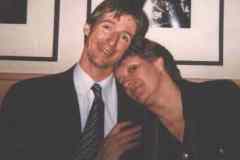 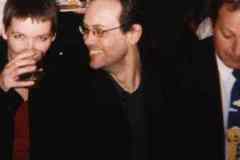 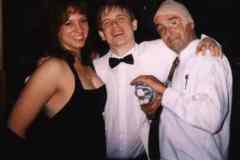 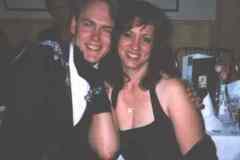 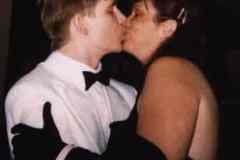 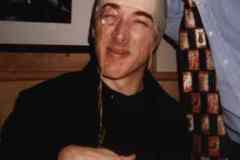 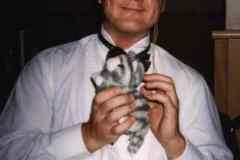 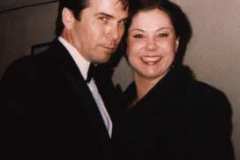