The Internet never forgets. Or it might forget, but it has a tendency to remember again later, coughing up hair-balls of long-forgotten events that you’d be prepared to swear had been consigned to the trash-can of history. Or, in this case, the TC archives, for tucked away in the corner of And This Is What The Devil Does, was a grainy, obviously ripped from VHS (complete with rolling tracking lines) recording of the Revolting Cocks live performance at the Astoria in London from January 24, 1991.

This was an event which I had attended, and written about all the way back in TC 9. It remained one of my all-time most memorable live experiences: all gigs, even the Rammstein one written about a month or two back, were measured up against it, I had, at one point, a copy of the same bootleg vid, but this had gone among the missing in the two decades and 5,500 miles of relocation since.

The Astoria, meanwhile, had bit the bullet as well, having been demolished in 2009 as part of the London Crossrail project. My other leading memory from there is a show with Front Line Assembly + Sheep on Drugs, which seems have taken place in October 1995. The basement formed another venue, known as the Astoria 2, and it was in there that I saw VNV Nation in 2000, less than a month before moving permanently out to Arizona…and seeing the band again on the night I arrived in Phoenix! But to get back to the RevCo gig…

The concert footage  is, of course, seriously crap quality. Even at the best of times, you’d get better quality shooting from a modern-day cellphone, and that’s when the lights from the stage are not completely blinding, reducing the screen to a white blotch accompanied by a badly-distorted soundtrack of industrial metal. Our son wandered in during the early stages, glanced at the screen, then left without comment. While it might have been different had there been breasts on view at that point (we’ll get to that later), it’s not exactly a ringing endorsement of the experience. However, this kind of bootleg is less about convincing the neutral as to capturing the essence of a live event for those who were there. As such, this does the job impeccably.

As the band takes the stage, we see Luc Van Acker, clad only a lucha libre mask [which, amusingly, I described as a “neon ski-mask” at the time of the original review, having clearly no clue about Mexican wrestling!] and Speedos. Al Jorgensen is beside him, dressed like a villain from a Sergio Leone movie, in a duster and Stetson. They open with the anthemic Beers, Steers and Queers, and it’s not long before the audience is getting into the spirit, adding their own spin to the first part of the title, by hurling cans at the stage. Fortunately, tins of minced beef did not follow. In absolutely the right approach, Van Acker basically ignored them – I remember another show where a disliked support band’s lead singer issued the immortal line, “If you don’t stop throwing things, we’re going off.” Cue an absolute hailstorm.

After that, and a brisk remixed version of BS&Q, it was on to their cover of Physical, with the relatively well-dressed Chris Connelly – in that he was wearing a suit jacket, as well as his boxers – taking over on lead vocals. Oh, and did mention the pair of go-go dancers who were now vamping things up around the stage? TV Mind saw a third vocalist (Phildo Owen? Trent Reznor? The personnel of the band in this era was fluid, shall we say) join the cacophony, and one of the rubber dolls placed on stage was thrown into the crowd, to be torn apart by the crowd. The camera was up on the balcony looking down, and I can’t believe I was in that scrum of humanity, though probably not quite in the pit, having learned my lesson at a Cramps concert the previous year, where I ended up in hospital, getting my lip stitched.

Van Acker, apparently feeling upstaged by Connelly’s sartorial elegance, or perhaps suffering an inferiority complex, had wrapped a towel around himself. Or it may have been just so he could simulate masturbation with a bottle of beer, spraying soap-suds onto the front row. Not to be outdone, Connelly spent much of the next song, Union Carbide, simulating sex with one of the dancers, in a variety of positions. Ok, on further review of the tape, let’s go with probably simulating sex. Meanwhile, Jourgensen carried out possibly the most transgressive act of the entire evening, from a 2012 perspective. He lit a cigarette on stage. I was shocked by this blatant disregard for the lungs of those attending this event.

There was a steady stream of crowd surfers – undeterred by the risks of passive smoking – who had to be ushered off-stage by security. During No Devotion: one of the youngest – barely a kid, who looked vaguely like Neil Morrissey – can be seen politely asking a big, dreadlocked surfer who’d ended up on the stage if he’d mind very much rejoining the audience. The surfer just stared at him and wandered off towards the back of the stage. [The stagecrasher who made a grab for one of the dancers was treated a good deal less kindly. Mind you, their tops had now come off. ] During Chickenshit, it was Neal Morrissey vs. the Dreadlocked Surfer, Round 2, and this time it took the combined efforts of several security guards to force the latter off-stage. Only, when he went, he took Morrisey with him, tumbling into the moshpit together, like the end of some previously-unseen entry in the Predator series.

Luc Van Acker was now wearing a Queen Elizabeth rubber mask and fake breasts, but still simulating sexual acts with one – ah, to hell with this, let’s call her what she was and be proud of it – stripper during Stainless Steel Providers, while the other stomped the remaining rubber doll to death. The encore, an extended version of Get Down, complete with Bruce Campbell sample, unfolded against a barrage of strobe lights, smoke and cacophonous guitars which leaves the viewer struggling to make out a fraction of what was going on. If you can imagine being trapped in a tank during a heavy artillery barrage, you’re thinking along the right lines. 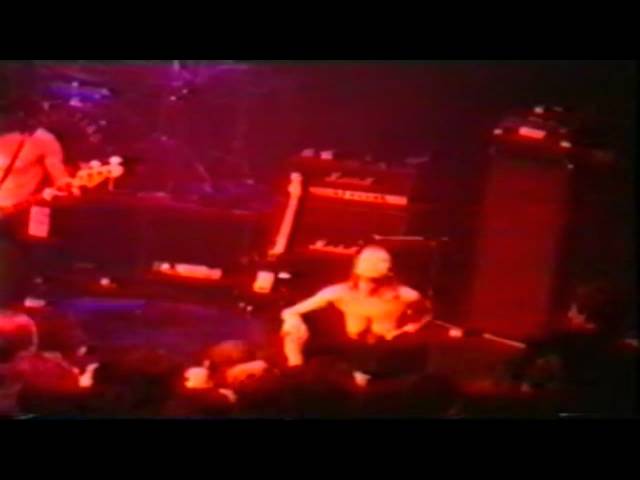 But it was during Attack Ships on Fire (above), that I realized why this was still the yardstick by which all live performances should be judged: an absolute wall of sensory experience, summed up by Owen shrieking, “Someone, somewhere, wake me up!” while a topless vixen emerged from a cloud of dry ice behind him, and a faux Queen wearing a plastic policeman’s helmet shags another stripper off to one side.

That, folks, is entertainment. And it was, and remains, fucking awesome.

For more fun, read and enjoy Jason Pettigrew’s awesome diary of the US leg of thst RevCo tour. It includes such joys as “some pink-haired trollop gave Michael Balch a hand-job under his Fairlight (“She has a good reach. I suggested that she play basketball,” says Balch later.)”