One of the delights of this job is that occasionally a movie turns up that surpasses all expectations. ‘Deathstalker II’ is such a film – its predecessor was an amiable and instantly forgettable sword and sorcery romp, so before viewing the sequel I was expecting it wouldn’t be long before I started doing something more intellectually stimulating, such as trying to hold my breath while the tape counter on the video ran for a hundred. I was totally, unexpectedly and wildly wrong.

It starts innocuously enough with Mr D.Stalker (Terlesky) stealing a jewel from a standard, Mark IV, evil warrior/sorceress. “I’ll have my revenge”, she says, “and Deathstalker too”. Cue title: DEATHSTALKER II. Ok, as puns go, it ain’t great, but it was enough to make me stop holding my breath. I suppose I should have expected SOMETHING from Jim Wynorski, who gave Traci Lords her big break in (certificated) movies and provided the second best exploding head sequence ever in the wonderfully titled ‘Chopping Mall’.

The film is set in a totally indeterminate time and location: references to Conan and Merlin spatter the script, accents are unashamedly all-American and there’s a brief glimpse of a signpost with pointers to Cimmeria, Lemuria, Kathmandu, Nokhandu, Altair and Golgotha.

Deathstalker rescues a seer (Gabrielle) from a beating at the hands of some guards after she made a slightly undiplomatic prediction involving the King’s wife. She convinces him that there is a mission for him to accomplish, namely defeating an evil sorcerer and restoring a princess to her rightful position on the throne in a far land. The accuracy of this particular prediction is not to be doubted as Evy the Seer (aka Evy I) is also Evy the Princess, who has been replaced by a clone, controlled by Jherak the Sorceror. At that end, all is not well as Zoltana, the female warrior who helped Jherak in his fiendish plan, is mildly miffed at being replaced by a mere duplicated bimbo (Evy II) and before you can say “Bitch Wars!”, they’re clawing each others eyes out verbally.

Meanwhile, accompanied by a sound-track that’s part Ennio Morricone, part Walter Carlos, Deathstalker heads across country to try and rescue the princess, little knowing that she is already seated behind him on the horse.

Plans to stop them are afoot, naturally. The villains are plotting in a seedy tavern where all sorts of nefarious activities are taking place, including some bimbos-in-mud wrestling. Hang on, I’ve seen this bit somewhere before; enter flashback mode and marvel at how ‘Deathstalker II’ subtly steals footage from, er, ‘Deathstalker’. Presumably this is a subtle dig at barbarian films which rip off any effect they’re too mean to do themselves, as the budget here looks easily capable of stretching to three inches of slime and a couple of ‘actresses’ to writhe about in it.

Five villains are hired to dispose of Deathstalker. Naturally, they fail, despite a lot of flashy, and entirely gratuitous, pyrotechnics. Their leader reports back to Jherak, courtesy of a magic pool which only works AFTER you throw some coins into it; good job this wasn’t a British film, or the pool would undoubtedly have been marked ‘999 CALLS ONLY’. Jherak isn’t chuffed and slams the pool down. Well, to be more exact, slams his SWORD down. Down his subordinate’s throat, VIA the pool.

Along the way, Deathstalker decides to engage in a touch of grave-robbing to replenish his finances. This worries Evy I somewhat but despite her excuses (“Wait, I left the door to my hut open”) and complaints (“I was just starting to enjoy poverty”), Deathstalker proceeds to make a withdrawal from the primitive ancestor of the cash machine, a family crypt. He is trapped inside and after a brief discussion with Jherak’s ethereal form is faced with a pressing engagement in the shape of opposite walls moving together. “The old crushing walls routine”, he taunts Jherak. “Couldn’t you do any better than that?” Meanwhile, Evy I is doing no better outside, facing some zombies. Needless to say, with one bound, both of them escape.

Evy II has problems of her own; bits of her anatomy keep flickering out of view and her court minstrel insists on playing the Morricone/Carlos ripoff heard whenever Deathstalker appears. “Don’t you know any other tune?”, she snaps at him, before lunching on a quick snack of a teenage boy to restore her lost appendages.

After a swift re-run of a very old joke, namely “Is that your sword or are you just pleased to see me?”, they are captured by a tribe of Amazons, who insist Deathstalker fights their champion, in a trial by combat for his crimes against womanhood (basically rogering anything in the appropriate chamois bikini). No hassle, reckons our hero, having detected the Amazons carefully manicured fingernails and deducing they won’t be up to much in a fight. “I could beat them with my eyes closed”, he declares. “Perhaps you ought to keep at least one eye open” warns Evy I, who’s spotted the arrival of Gorgo (played by the aptly named Queen Kong), a full head taller than Deathstalker (not exactly dwarven himself) and built like Edinburgh Castle. 15 rounds of impressively staged wrestling later (the rounds indicated in classic sword-and-sorcery manner by a bimbo walking round the ring carrying a placard), Deathstalker wins but in heroic style refuses to administer the coup de grace.

It’s after this that he discovers Evy the Seer is really Evy the (temporarily out of work) Princess but decides to stay with her when the Amazon Queen uses the words “you”, “me” and “marriage” inside a minute. Evy I runs off and is captured by Zoltana, who dangles her over a vat of unspecified substance (probably Triple-C whateveritwas again!), with dark hints about what it’ll do to Evy I’s (Evy’s I?) love life.

Needless to say, Deathstalker finds them and despite Zoltana using vaguely familiar lines like “It’s payback time”, she is killed and Evy I is rescued. But wait, Jherak recovers Zoltana’s body and rescues her, the resurrection using a flashing strobe light dangerously near the epileptic frequency. The first thing Jherak does is bonk her brains out (I’ll rapidly gloss over the medical problems here, to say nothing of possible religious symbolism) – unfortunately, Evy II sees them at it and exits, pouting petulantly. DS and Evy I enter the castle and the former is captured – luckily, Evy I escapes and goes to fetch help in the shape of the Amazons, pausing only for a massage. Yes, a massage. I kid you not. 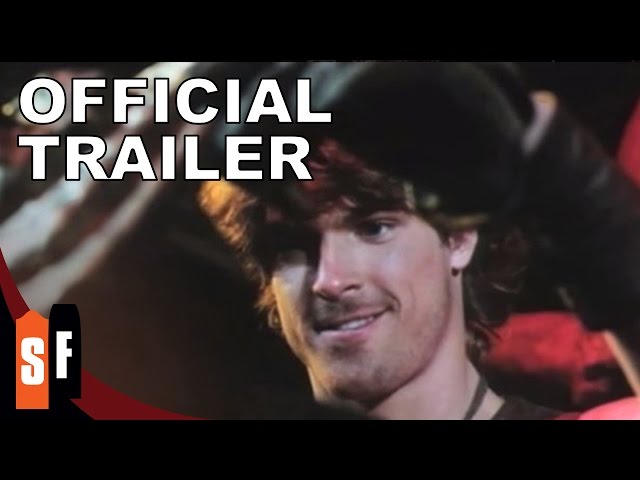 Zoltana consigns Deathstalker to certain death under a swinging axe, only for Evy II to rescue him. That’s rescue, Jherak style, so she bonks his brains out, even if she’s still wearing her panties, which is a little like being given a Xmas present and being told you’ve to keep the wrapping paper on. Evy I hits Evy II over the head and saves Deathstalker from becoming a between meals snack. Off they run to join the Amazons, only to be met by Zoltana and Jherak first, although the Amazons do appear just in time to rescue them both, making five rescues in this paragraph, which is quite enough.

Then follows a great barbarians vs. bimbos fight, in the middle of which Zoltana gets bored and drifts off, never to be seen again, at least until the sequel. Evy I knives Evy II, causing the latter to crumple into a pile of dust and this writer to cheer with relief at the prospect of escape from the grammatical minefield of Evy’s I & II.

Needless to say, the film climaxes with a duel between Jherak, Deathstalker and some music ripped directly from ‘Star Wars’. Jherak comes second, way ahead of the music, leaving Deathstalker to claim his prize, which of course is Evy – with her gift of prophecy, she foretells that in a thousand years, players will re-enact their adventures. “I hope they get a good-looking guy to play me” is Deathstalker’s final comment.

This film’s Incredibly Bad stance stems from the director’s sense of humour; most of the lines and scenes are there without being historical accurate or necessary to the plot, but purely because they were fun. That this works, rather than falling flat, is largely due to the stars, Terlesky and Gabrielle. Both seemed to be thoroughly enjoying themselves, Terlesky resembling Kurt Russell at his best and Gabrielle clearly revelled in the chance to play two opposing characters; it’s difficult to believe the scatty Evy and the catty clone are the same actress. Perhaps the best indicator of the film’s attitude occurs as the end-credits roll over a series of out-takes, cock-ups and Monique Gabrielle having difficulty in walking. That the film-makers saw fit to flaunt their imperfections proves they’re human and shows beyond a doubt their hearts are in the right place.