One thing that is sadly missing from the music scene today is a sense of humour; everyone takes it all so seriously, there no longer seems to be room for fun. Is there any act now to compare with Devo?

Who? Fair enough – they are perhaps one of the most neglected and misunderstood bands to have managed to fill venues as large as Newcastle City Hall. They’ve met with critical incomprehension and public ridicule due to their mode of dress (‘flowerpot’ hats & yellow jumpsuits) as well as their bizarre philosophy.

The Devo story began in the early 70’s in Akron, Ohio. Two sets of brothers, the Mothersbaughs ( Mark, Bob & Jim ) and the Casales (Gerard and Bob) were the initial members, though Jim soon left to be replaced by Alan Myers. They produced a complete mixed-media and lifestyle package; music, videos and the theory of ‘De-Evolution’, based on the idea that mankind was actually reversing the process of evolution through increasing reliance upon consumer culture (Devo followed this theory by releasing increasingly commercial/sanitised LP’s, culminating in the ‘E-Z Listening’ discs; Devo songs done in Musak/supermarket music style). Their latest release, ‘Now It can be Told’, marks something of a return to basics and is perhaps the better for it.

Helped by David Bowie, they record their first LP with Brian Eno at the controls, and ‘Q: Are We Not Men? A: We are Devo!” was released in 1978, when punk had taken root in the psyche of both Britain and the US; indeed, Devo described themselves as “the fluid in punk’s enema bag”. An extraordinary achievement, unlike anything recorded before, the highlight (and near hit, reaching no. 41 in the charts here) was a robotic version of the Stones’ “Satisfaction”, which bore little or no resemblance to the original. This catapulted them into the spotlight, especially in California and New York, where they appeared on the infamous ‘Saturday Night Live’.

Since then, they’ve released seven studio LP’s, plus three live ones (though since one of these only had one side, and another comes in at under 18 minutes long, it’s probably nearer two!), gradually, as mentioned above, becoming more synthetic. Commercial success here has always eluded them, though ‘Whip It’ sold over a million in America.

The best way to appreciate the Devo ideology is to see their videos; “We’re All Devo!”, out on Virgin for 9.99 or occasionally available for rent, contains many of their best songs from the first five records and also stars some of the weird personalities that inhabit the Devo world; Rod Rooter, the sleazy record exec brought to it’s obvious extreme, Dr Byrthfood, their ‘creator’ (played by acid guru Dr Timothy Leary), General Boy, commander of the Devo army (in reality, the Mothersbaugh boys’ father!) and Booji Boy, a mutant doll-faced peculiarity who acts as Devo’s mascot.

Their sense of humour is rather odd. They got into Major Trouble with their record company for ‘forgetting’ to mention that the lyrics to one of their songs were taken from a poem by presidential assassin (failed) and one time president of the Jodie Foster fan club, John Hinckley Jr. “I desire / Your attention / I desire / Your perfect love / I desire / Nothing more or less” it went, and Warner Bros had to pay royalties to a crazed gunman. The Devo contract was not renewed.

Basically, there are so many aspects of Devo that it’s impossible to cover them all. Their habit of covering famous songs in their own style ( not only ‘Satisfaction’, also ‘Are You Experienced?’, ‘Working in a Coal Mine’ and “Don’t Be Cruel’, to name just a few ), their ill-fated church which fell through due to death threats (it was another example of their sense of humour – they’re all atheists), an LP of Devo imitators, film soundtracks (they had a track on the ‘9 1/2 Weeks’ album, though oddly enough not on the UK release of the film, due to copyright problems I think) – all combine to make up one of the most amusing, interesting and, quite frankly, astonishing bands to have come out of the United States. 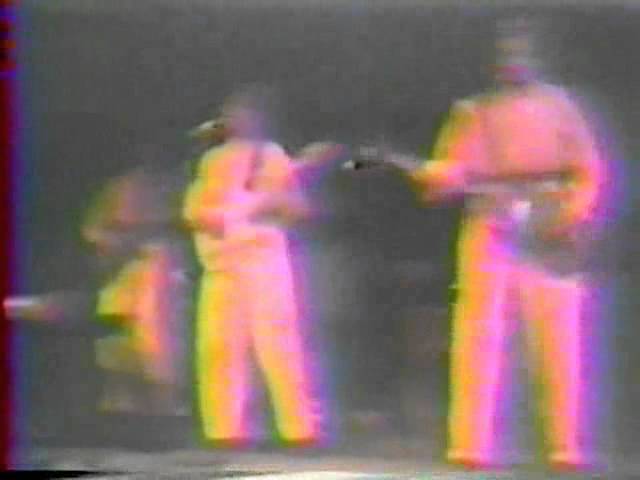 Many of their LP’s are now available for 3.99. As a special Trash City offer, and to encourage you to try them, if you want to send me a blank cassette ( C60 or C90 ) and an SAE, I’ll put together a sample tape. What have you got to lose?