The Gospel According to the Men in Jumpsuits

“…And the acolytes of the great Gods, NME and Melody Maker did heap scorn upon the men of Devo and did say unto their followers : Look at these blasphemers, in their yellow jumpsuits and their flowerpot hats and laugh at their banal lyrics for they are Not To Be Taken Seriously.”

“…And the men of Devo were wroth and did retire to their homeland across the water and plotted the downfall of the Conspiracy and produced some very good LP’s, soundtracks for some not very good films and did write the music for the PeeWee Herman show.”

“…And there was much wailing and gnashing of teeth among their followers, and the doubters among them did throw away their plastic and became Spud Boys & Girls, or joined the Conspiracy, but those of true faith remembered the words of The Great Mothersbaugh when he said ‘Are We Not Men?’ and they kept the spirit alive.”

“…And many years passed, and the Beast with the three heads called Stock, Aiken and Waterman did bring fear and terror to all on the music scene and the people prayed for a saviour to deliver them from the Anti-Christ who was named Kylie.”

“…And The Great Mothersbaugh had not forgotten us and he said ‘Lo, let us tour Britain again’ and the other priests of Devo did verily say ‘Yeah’. So they played two nights at the Town & Country Club and one night in Manchester, which might not seem much of a tour but is better than nothing.”

“…And the Devo-tees did rejoice and brushed the dust off their unfashionable streetwear and did gather together. But they were nonplussed for the men of Devo were not on stage, there was a film show instead and the Elder Ones shook their heads and did remember Kraftwerk in 1981 when the band used plastic dummies as stand-ins .”

“…And then it became All Right when Markie (as The Great Mothersbaugh likes his followers to call him), Bob I & II, Gerry the Casale and the new drummer whose name we dare not speak (but I can remember it, honest) did come on stage and wax lyrical.”

“…And at the end, The Great Mothersbaugh did pull handfuls of spring onions from his underpants and did throw them into the throng of his followers, who did cheer mightily. But the biggest cheer of the evening was when the Men of Devo did put on their flowerpot hats which are a sign of their favour with the Gods, if perhaps not the record-buying public.”

“…And everyone did say “That was a worthy concert”, except for the critics who wrote literary essays that failed to say anything of interest at all. But frankly, who gives a damn?” 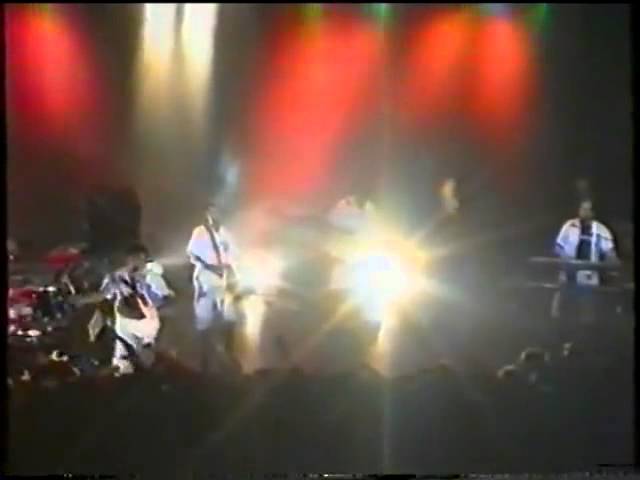 There are certain occasions in my life, some pleasant and others I’d rather forget, that have taken on a sort of ill-defined, dreamlike quality, where reality gets distorted and it becomes impossible to distinguish what really happened from the products of my deranged imagination. This tape is the aural equivalent of one of those events: even after several listenings, switching off the cassette is like waking up from a nightmare.

Fortunately, I quite like this aural nightmare. How else could you describe a track like ‘Holiday Camp/Torture Chamber’, which starts off as a sound picture of Butlin’s before, yep, you guessed it, slipping sideways into the soundtrack to ‘Ilsa, She-Wolf of the S.S’. Other titles include ‘The Day My Brother Choked on a Hot Dog’, ‘We’re So Crap’ and ‘The Reason I’m in a Wheelchair is Because I’ve Got No Legs’. The last is probably the best track on the album. It features a paraplegic being run over by a train.

This dates back to 1985, when Lung! had some brief moments of infamy. It was recorded in the school toilets and features a large number of things being broken – windows, chairs, urinals an electric fire and lots of plates although precisely what the plates were doing in the toilets escapes me. Despite efforts to ban them, they managed to play live in front of the school (the notes are unclear whether this means the location of the concert, or the audience for it!) and upset a lady by hitting her on the head with a cardboard box. By accident.

We’re talking very basic sound here – few live tapes include the sound of one of the band members pausing for a pee, but given its location, what do you expect? Post World War III, when the new cavemen are making music round their camp-fires by the glow of radioactive Basingstoke, this is what it’ll probably be like. It doesn’t all work – there’s an element of sub-juvenile humour which does grate annoyingly but even when this isn’t avoided, the tracks are so (mercifully?) short that you won’t have long to wait until it’s all over. The general result is a refreshing dose of anti-music, as in a quite unique version of ‘Rock Around the Clock’, capable of raising Bill Haley from the dead, or at least making him turn in his grave.

It’s all completely unlike anything I’ve ever heard before. Whether it’s something I ever want to hear much more of is a different matter! There was apparently a follow-up recorded, which was snatched in mid-air by a crow (don’t ask me, this is only what I was told!) and the recording of the follow-up to the follow-up is a little problematic as “one member is either in jail or dead”. It is unlikely to be an attempt to cash in on the current dance craze. Still, any group that can give a message to their fans of “You’ve wasted our time, I hope we’ve wasted your time and I hope you all die” has clearly got the right attitude to make it big in the megabucks world that is 90’s pop music.

[“Having Fun in an Iron Lung” is available for a blank tape and an SAE from Simon Wood, Fieldside House, London Road, Blewbury, Oxon, OX11 9NY. Ask for a few Lung! stickers while you’re at it.]