Truth be told, I’ve never been a particular fan of Van Gogh. I prefer my artists a bit more technically rigorous, such as the Pre-Raphaelites, like John Everett Millais. But there’s no denying the cultural impact of Vincent Van Gogh, and if one artist was ever going to have an “experience” devoted to him, he’s the obvious choice. Or, rather: multiple experiences, for it seems there are quite a few of these travelling events doing the circuit this year. Each claims to be the best, but I’m not going to get into that. This is the one which staked its spot first in Phoenix, so we’ll go with it.

Firstly, the negatives. You will almost certainly leave this knowing not one thing more about Van Gogh than you did when you arrived. There’s no real effort to educate attendees; when Chris asked me “Was he Belgian?”, there was nothing in the exhibition which answered the question [to save you the bother of Googling it: born in the Netherlands, worked and died in France]. In terms of any glimpse of the man, all it offers is a selection of his letters, printed on mirrors which… tell you almost nothing, shorn of context as they are.

Then there’s the gift shop. You name it, you could get it with sunflowers or Gogh’s mug on it. Bone china teacups? Flasks? Little plush Vincents? Even, as shown at the right, an entire wall of Van Gogh socks. I have to wonder what the artist would have thought about this merciless, often crass, merchandising of the work he couldn’t give away when he was alive. Even though his works themselves are now officially in the public domain, it’s clear that someone is making a good deal of money from the exploitation of his images. But that’s actually fair enough, because this was clearly not a cheap endeavour.

Which brings me to the positives, which would be basically the 40 minute “experience” itself. Taking place over several high-ceilinged rooms, it is an undeniably impressive visual spectacle, in which the artist’s works are projected onto the walls and floor. It’s done in a way that is genuinely disorienting; when you first walk in. It feels like you might drop through the ground. The scale and resolution just blows you away, and even if you may lose some of the texture that’s an essential part of Van Gogh’s style, they are animated in a way which feels like they are being painted in front of your eyes. There are points when, again, you feel you are almost falling into the pictures, perhaps a glimpse into the deteriorating mental state of Vincent in his later years.

The projections are accompanied by music, of varying appropriateness. Fortunately, they didn’t go the Don McLean route, though I’d not have objected to a little Jonathan Richman: “Now in the museum, what have we here?/The baddest painter since… Jan Vermeer!” Perhaps a little too upbeat, for the tone here was largely solemn to the point of reverential, perhaps best summarized by Edith Piaf’s Non, Je Ne Regrete Rien. But towards the end, they used the climax of Mussorgsky’s Pictures at an Exhibition. While an obvious choice, that was breathtaking, the colours on the screen exploding like fireworks as the final chords bloomed triumphantly, like sunflowers. Well played, Immersive Van Gogh. Well played.

“We should have taken some ‘shroom”, said our daughter on the way out, and I can see her point. On the other hand, this is probably a fairly accurate imitation of that experience, without needing to ingest anything. As someone’s whose straight-edge in the drug field, the closest approximation I’ve previously had, is likely the kind of lurid dreams resulting from too much double-pepperoni pizza. Just without the bloated feeling, fortunately. While the tickets weren’t cheap – they start at forty bucks for off-peak entrance – I can’t say I felt short-changed. It certainly did provide the “immersive experience” promised by the title.

But as far as connecting with the spirit of the man, although this exhibition had its moments, it can’t beat Vincent and the Doctor. That’s an episode of Dr Who in which the time-lord brought the artist back to the present day, so he could see the impact his work had on the world. Emotionally manipulative? Sure, as hell. But the writing, the music, and the performances makes this about the only TV moment which genuinely reduces me to tears. Every. Single. Fucking. Time. As Bill Nighy’s wonderfully delivered monologue puts it:

To me, Van Gogh is the finest painter of them all. Certainly the most popular, great painter of all time. The most beloved, his command of colour most magnificent. He transformed the pain of his tormented life into ecstatic beauty. Pain is easy to portray, but to use your passion and pain to portray the ecstasy and joy and magnificence of our world, no one had ever done it before. Perhaps no one ever will again. To my mind, that strange, wild man who roamed the fields of Provence was not only the world’s greatest artist, but also one of the greatest men who ever lived. 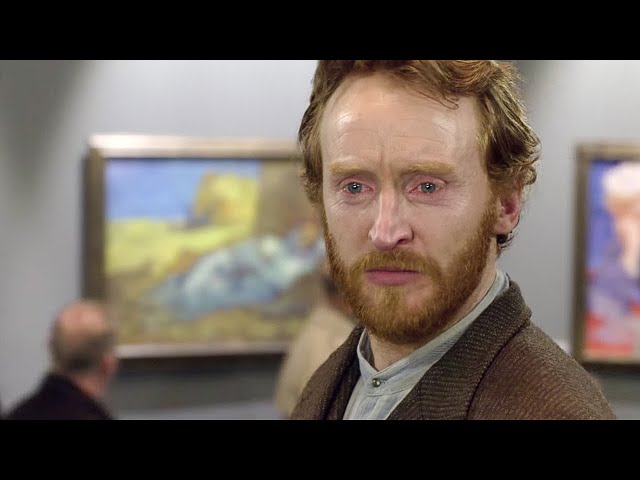