Readers should already be aware of our fondness for prehistoric reptiles. So you will not be surprised to hear that we were there for an event which described itself as “dinosaurs in the boxing ring, fighting to determine who is the fiercest creature of the prehistoric era.” You pretty much had us running to buy tickets at “dinosaurs in the boxing ring”. This was actually a return for us, having attended a previous such event in February 2019. That wasn’t reviewed, since I was between websites at the time, but I have no intention of letting it pass without commentary again. Below is a video which will give you some idea of what this was like. Complete with me yelling.

It is, in many ways, a case study in going in with the right expectations. It would be supremely disappointing, if you are expecting Jurassic Park level mayhem. These are, after all, fights between two people in cumbersome costumes, with all the limitations that entails. The most obvious weapon, the carnosaurs’ razor-sharp teeth hardly ever came into play, With their arms all but useless (making the little MMA gloves on them amusingly pointless), what you got was basically a gently-paced shoving match, with occasional tail whips for variety. What I really wanted to see was dinosaurs doing moonsaults, along the lines of Kaiju Big Battel. But you take the dino-mayhem you can get.

Another limitation, likely inherent to the production, was a certain sameness to the participants. While announced as being anywhere up to 20 ft. tall and eight tons in weight, all of the ones that took part here were actually… well, human + costume sized, and bipedal. Slightly different accessories, in terms of horns, spikes and so on. But if you can tell a Stygimoloch from a Spinosaurus without Wikipedia, you’re a bigger fan than us. More variety would have been nice, say pitting a Triceratops against a pair of Velociraptors. And, of course, we’d have welcomed more lethality, traumatized children be damned. 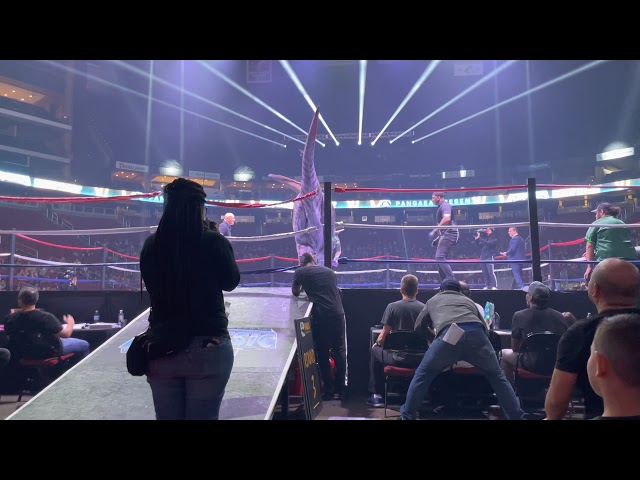 But, as mentioned, we knew what we were getting into. This is an undeniably unique experience. Where else are you going to get to yell, “You suck! I lost money betting on you!” at a defeated dinosaur, as it is led away from the ring? So, taken in the right spirit. you can still have a lot of fun. Admittedly, the three pints of beer I sunk pre-prehistory may have been a factor. However, it is done with an admirably straight face, and all the glitz, glamour, ring girls and indoor pyrotechnics you would expect from UFC show. Hell, they even had a giant championship belt, though sadly, we never got to see how it would get tied around the victor. Neck? Waist? Above or below those stubby little arms?

Also helping matter, ring announcer Chuck Drago, who typically works the local major-league baseball franchise, deadpanned his way through the introductions and interviews with an admirably straight face. We appreciated the pro wrestling references – one participant was called Rowdy Roddy Raptor (wearing tartan, naturally), another The Indotaker, and a third (below) wore a lucha mask, presumably to avoid his identity being exposed in public… Things were likely most fun when diverting from the usual path, such as one of the dinosaurs going after and mauling the referee. More like this is certainly possible: dinosaur run-ins, human manager interference, low blows while the ref’s back is turned, etc.

Interestingly, since last time, the federation had become equal opportunity, opening a “Dino Divas division”, which was responsible for half of the eight fights. Not that you could really tell, of course, reptiles being fairly unisex in appearance. More sparkly ring attire, and a pre-bout warning about “No kicking in the egg sac”, was about the extent of it. Still, these diva fights were both better and longer than those put on by the WWE in the late 2000’s. At least these lady dinosaurs did not have to wrestle each other in chocolate pudding.

Half the fun here was watching the reactions of the little kids in the audience. Because, let’s face it, that’s the target audience for the event, not us. The younger children were rather cautious, occasionally hiding behind their mothers’ coat-tails. But the slight;y older ones were watching, jaws agape, at what was probably the coolest thing they had ever seen, and I’ll admit, such enthusiasm was infectious. [Examples of both concern and awe can be seen in this picture] You need to buy into proceedings, and start cheering for your favourites. That’s what we learned from the first event. At the beginning, we were, “We have made a terrible mistake.” But when you let go and embrace the completely ridiculous concept, you may find it is two and a half hours of solid entertainment, you won’t see anywhere else.

A final complaint though, more about the venue than the event. One of the two attendees shown in this picture was not allowed entrance to the venue. It was, of course, the one on the left, due to her purse being an inch and half larger than the approved size. I felt so much safer after having run back to the car to deposit it. The inflatable velociraptor? Come right through, sir! Down the road, I fully expect to hear about Al Qaeda taking advantage of this dino-sized loophole and carrying out an attack dressed as carnosaurs.