“It is better to be violent, if there is violence in our hearts…”
— Mahatma Gandhi, Non-Violence in Peace and War 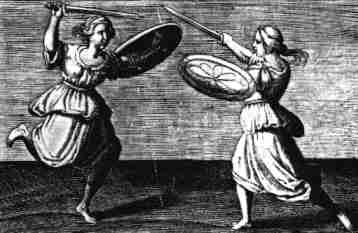 Unwilling though we may be to admit it, violence is an integral part of human nature. Any civilised society needs to come to terms with it, and find an appropriate, sanctioned outlet through which its population can release those aggressive tendencies. In olden times, war was the release-valve of preference: ship you angry young men off to the front, and let them kill someone else’s angry young men. Not a problem – at least, unless you’re one of them. But what do you do when society is stable, and there are no convenient wars to hand?

Simple: you fake it. Nowadays, you can get your fix of cathartic violence on TV, through the carefully choreographed spectacle of the WWF or the latest Arnie movie. Two thousand years ago, however, the nearest you got to video was running past a frieze at 24 panels per second. So they had gladiatorial combat instead. Although this spectacle started off as a way of honouring dead warriors, it was clearly an idea to good to waste on corpses, so it eventually became an entertainment in its own right. The scale of some of these events was striking: in AD 107, the Emperor Trajan staged a victory celebration which included 10,000 combatants. 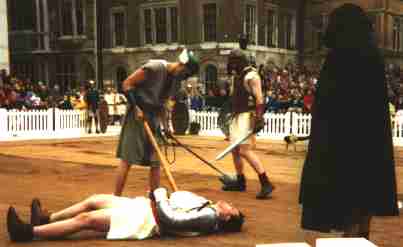 Even the fringes of the Empire got in on the act. London had an amphitheatre in what is now Guildhall Yard, capable of seating 7,000 people. This shows just how popular a spectacle it was: the total population of the city was only 20,000 at that time, and you didn’t tend to get many away supporters either – “Gaw’n, Christians!” Recently, the Museum of London staged a demonstration of gladiatorial combat on this very site, and I went along, keen as ever for my fix of cathartic violence, and clad appropriately enough in a Stone Cold Steve Austin jersey…

Despite the ambulance parked outside, there was no death and not even any mutilation – much to the chagrin of one passing small child who was heard to mutter “Those swords aren’t sharp…” with obvious disappointment. But as a spectacle, it was still impressive – what the weapons may have lacked in the edge department, they made up for in heft, and they weren’t holding back: you could see sparks flying. Any misplaced blow would have shattered your arm like a toothpick, and on one occasion, a sword broke mid-shaft, spinning down to the dirt. The feel of danger was enhanced by the not-exactly secure matting which was used on the courtyard in lieu of dirt – it wasn’t fixed down properly, making any movement fraught with danger. 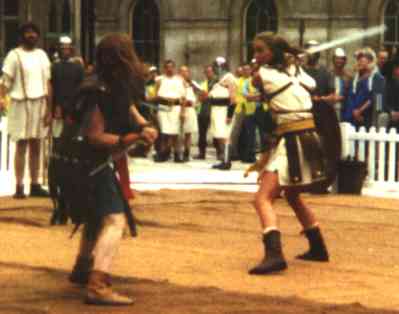 I confess to having had a special cheer for the women gladiators, who were every bit as impressive as the men. Recent excavations in London turned up the remains of one such competitor, the first physical evidence to support written records. In a strange parallel with the likes of Chyna in the WWF, they were generally regarded as outsiders, even among the mix of low-lifes, prisoners of war and condemned criminals, that made up the bulk of the fighters. In AD 90, the Emperor Domitian presented combats between women and dwarves but a later successor, Septimus Severus, banned them in AD 200.

Indeed, the whole spectacle had more than a touch of professional wrestling about it; the crowd hollering for their heroes while booing the villains, the flashy costumes, combat as a public spectacle and (in this re-enactment at least!) the spectacular but choreographed violence. But, if anything, gladiators had more rules to follow: attacking an opponent from behind was forbidden and would get you a lot more than a stiff talking-to from the referee — you were killed by the stadia guards. No blind-side chair shots, by request. 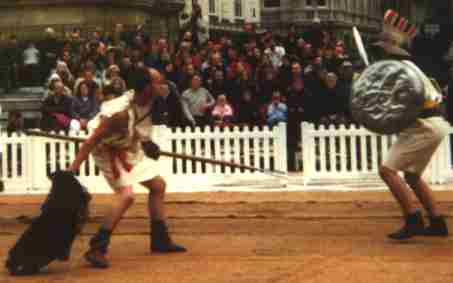 Such historical sidelights meant that this event was probably a bit more educational than the usual edition of Nitro. As well as the fighters, there were other “citizens” taking roles, from the businessman sponsoring the games, up to the emperor who made the final decision as to whether losers got the thumbs-up or down (the coup de grace could also be applied if injuries were deemed too severe). And it was also nice to see some members of the audience thoroughly getting into it, judging by the objects being thrown into the ring after the final bout was won by the emperor’s champion, though one suspects plastic bottles might not have been historically-accurate ammunition…

But such qualms aside, it was an impressive event, that did a good job of recreating the general atmosphere, albeit without the gore-drenched slaughter. Probably for the best, since we’re not as barbaric these days, are we. Are we?