My first encounter with Rammstein was on the soundtrack of David Lynch’s Lost Highway in 1997, where I initially mistook them for Laibach – and wasn’t the first to do so. Somewhat snarkily, Laibach said, “They have proven once again that a good ‘copy’ can make more money on the market than the ‘original’. Anyhow, today we share the territory: Rammstein seem to be a kind of Laibach for adolescents and Laibach are Rammstein for grown-ups.” I’ve particularly wanted to see Rammstein live since hearing Rob Dyer’s tales of spectacles such as keyboard player Christian “Flake” Lorenz sailing out onto the audience in an inflatable boat. But I moved out to Arizona before they came back, and missed their 2001 tour so had to wait. And wait. Finally, I heard that they’d be playing here, and I’d get to see Rammstein live, 15 years after first hearing them – I think that’s a record, pipping the 14 years before I saw The Human League. At least until I ever see John Foxx (21 years and counting!).

We warmed up by rewatching their Live Aus Berlin DVD, which gave us an idea of what to expect: spectacle of the highest order, and a shit ton of pyrotechnics, in this case capped by lead singer Till Lindemann setting himself on fire to sing one song. But that, in itself, was some time ago, with the band now a decade older and wiser. Or not, since they still prove capable of creating controversy, even as Lindenann approaches his fiftieth birthday. There’s something both weird and strangely energizing about that face: rock stars are not supposed to be older than I am, especially the ones at the more “energetically corrupt” end of the spectrum: Al Jourgensen would be another such case of growing old disgracefully.

Chris and I made a day out of it, warming up by going to see The Avengers, having dinner, and then spending some time hanging out on a balcony at Westgate Center, playing “Spot the Rammstein attendee”. It really wasn’t hard, because just about no-one wears black in Arizona, particularly, between May and September: less a fashion choice than a survival requirement, in a land where you need oven-gloves to open your car-door in summer. It was, however, still interesting to note the broad spectrum of ages represented, from those who, like us, were around the band’s age, all the way down to high-school kids. On entrance, it was clear from the massive queues that merchandise was a large income generator – especially at $30 for a T-shirt. We opted not to bother with that, though did get a Rammstein flag, which will confuse the hell out of our neighbourhood come Memorial Day next Monday…

The group didn’t bother with a traditional support act. Instead, they had Joe Letz, drummer with another industrial act, Combichrist, come out and play harshly-remixed versions of their own songs. Reaction was “mixed,” I think it’s fair to say: I quite liked the remixes, but also heard shouts of “Fuck off!” I can understand the latter, not being a fan of DJs trying to act like they are actual musicians, as Letz seemed to think. The most amusing thing was the spotlights shining onto the stage were set so low that crowd members in front of them could use them to do shadowpuppetry. Needless to say, this opportunity resulted in rabbits, birds and not a few middle fingers being projected onto the screen. Like I said: mixed.

Then the actual show started, in typically unique fashion. In front of the sound booth in the middle of the arena floor, a pedestal rose up out of the floor, and down from the ceiling, a gantry descended, to form a walkway between that and the stage. Down from the side, the band members entered in a torch-lit procession, via the pedestal and gantry to reach the stage. before getting things under way with Sonne. That set the tone for the next two hours, an amazing mix of thunderous rock and visual awesomeness. which was just about everything a concert should be. One big plus: no new album, just a greatest hits’ collection, so there were no obligatory new songs which no-one knew.  Mutter was the most-played album – six of the 20 songs played came off it – but all six studio albums were represented from 1995’s Herzeleid, through 2009’s Liebe ist für alle da.

About the only mark deducted would be for Lindemann’s almost complete lack of crowd interaction. The master is VNV Nation’s lead singer Ronan Harris, with The Aquabats’ MC Bat Commander close behind, both turning between song banter into an art-form, which makes the audience part of the show and creates a sense of “belonging” which is also part of the live experience. Here, Lindemann barely acknowledged the crowd, with a couple of “Danke schons” being about the extent of it. Lorenz did, however, repeat the sailing trick mentioned earlier, voyaging out into the crowd on a rubber dinghy – and looked a good deal steadier than the presumably early attempt at the stunt on the DVD, though his trip was considerably shorter. 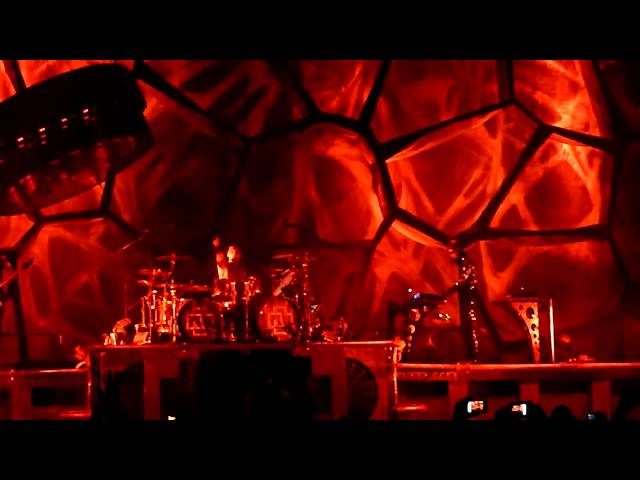 That said, the one word that sums this up would be “spectacle”. The group’s love of fire is clearly completely undiminished by the passage of time.  Lindemann is a licensed pyrotechnician, and the event featured fire shooting up from the floor, down from the ceiling and out over the crowd, to the extent that there were times when the band clearly had to be rather precise with their stage positioning, to avoid become bassist flambe. Fireworks were wielded, worn and strapped to instruments, but the most impressive early display was for Mein Teil, a song inspired by the Armin Meiwes internet cannibal case. That had Lindeman dressed as a chef, wheeling a huge cooking pot onto the stage, into which the keyboard player ducked and dived, while Lindemann unleashed what can only be described as a flamethrower at it. Repeatedly.

However, my personal favorite was likely Du Hast. Above is a clip of another song from the show, but it’s a perfect reproduction of what we got to see at our show, and captures perfectly the delirious sense that anything could happen at any time. The more the show went on, the further the level of excess seemed to escalate. Band heading back, via the gantry, on their hands and knees, as the drummer’s “dogs”, and playing three songs while crammed on the tiny middle podium? Check. An absolute torrent of sparkly chaff being unleashed in Amerika? Check. Lindemann riding a giant penis on wheels, and drenching the front ten or so rows in white foam during the last song, Pussy? That’d be a check, too. And this is in addition to the images shown on top of the article, which accompanied Engel. Any one of these would have been a climactic moment at any other show. Here, they were just another memory.

I’ve seen some amazing live events; the ones that stand out aren’t necessarily the “best,” they just stick in the mind for one reason or another. Maybe something good, such as the apocalyptic Revolting Cocks show at the Astoria in January 1991. Maybe something bad, like The Cramps gig where I ended up in casualty after going under in the mosh pit. But this one hit the absolute sweet spot between epic and incredible. I’ve not paid sixty bucks for a ticket to attend any band previously, but there is absolutely no denying that Rammstein provided value for money, an experience that was worth the fifteen years’ wait, and which will stay in my mind for at least that long.