Every year, it seems, more and more conspiratorial cracks appear in the landscape. This year, the war against Iraq, looking for those pesky – and apparently, non-existent – weapons of mass destruction, showed once again that politicians have absolutely no problem deceiving the electorate when they feel the need. Bringing this to the attention of the public is where events like Conspiracy Con come in, though the topics covered were far broader – and, being honest, covered the entire range of plausibility too. 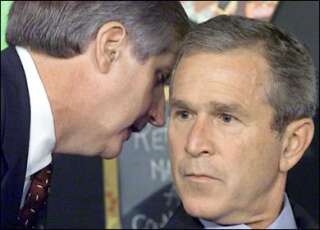 Despite the Gulf War, the most frequently-referenced topic was the events of 9/11. That our government should have known about it in advance seems certain, but the question now being probed is whether they did. There is certainly evidence, such as the remarkable delay in sending up interceptors, which suggests the possibility. And if you’ve seen photos of the moment when George Bush was supposedly told of the attacks, his reaction seems closer to “tell me something I don’t know already” than the shock and horror you might expect.

We preceded the event with a couple of days in San Francisco. If you go there, do yourselves a favour and leave your car at home. Driving is a nightmare, and parking is worse: our hotel charged us $25/day for the use of their garage. There is plenty of transport around the city, but they’re rather more vague about how you get into the centre. It was a relief to leave (albeit at a snail’s pace, onto the Bay Bridge) for the wide-open spaces of Santa Clara – even if we’d spend the majority of the next two days in the hotel, save the odd hunter/gatherer trip to the local curry house [And can I just say in passing that putting cloves into keema naans is an idea we hope does not catch on…]

There was another workshop, but you had to pay $40 to see Richard Hoagland, of “Face on Mars” fame – a feature now revealed (left) as no more than coincidental shadows. If I were in Hoagland’s shoes, I’d be more concerned about trying to regain some degree of credibility, and less about getting cash out of the public. We, needless to say, did not pony up to see him. Inevitably, this conference attracted some odd individuals, who had perhaps got out on day release. A couple of these showed up at the Q&A session, but others, unfortunately, chose to sit near us (attracted by Chris’s “psycho magnetism” – hey, she married me!). There was Ilsa, She-wolf of the Auditorium, to whom the slightest sound seemed to cause immeasurable pain. There was the Bag Lady, who demanded we clear off chair space…so she could put her possessions there. And there was the individual who, on hearing my British accent, demanded to know who’d killed Princess Diana. There was some disappointment at my response – know little, care less – and I wish I’d fabricated some (in)credible plot instead.

After the second part of Hoagland’s workshop (see above), it was time for the Q&A. This is always entertaining, for the wide range of topics covered and views aired, both by the panellists and the audience – at one point, I thought a fight was going to break out over whether it was the limo-driver who shot JFK. Perhaps the most interesting question asked for predictions of what to expect: Monteith reckoned a major biological attack was possible, but Hoaglund and Tsarion (who came over much better as a panellist than as an individual speaker) predicted the assassination of George W. Bush. Hoaglund pointed out that both The West Wing and 24 have had storylines depicting the vice-president taking over…

We remain amazed at the breadth and depth of the program Brian Hall and his team put on, and with commendable efficiency, everything running to schedule. While not every speaker was convincing (to say the least!), it was nice to learn our bullshit detectors are still fully functioning. We left, refreshed in our belief that whatever appears to be going on in society, is not necessarily what actually is happening. That alone makes our attendance at Consiracy Con 2004, a foregone conclusion.