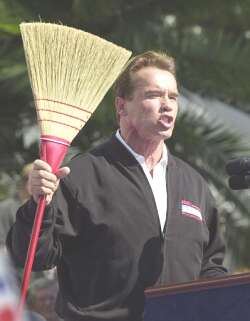 We are currently feeling rather smug about our neighbour to the West. While we in Arizona may have made some rather bad choices for our Governor (Fyfe Symington, forced to resign after being convicted of fraud – though eventually pardoned by Bill Clinton on his way out), we’ve never actually got rid of one mid-term. We were going to have a vote whether or not to dump Evan Meacham in 1988, for his misuse of state money and for cancelling Martin Luther King Day. But he was impeached before the election, avoiding the entertaining circus seen over the past couple of months in California.

You already know that Arnie won. You might also know about some of the other high-profile fringe candidates, such as Larry Flynt or Gary Coleman (probably the first time in decades Coleman and “high-profile” have appeared in the same sentence). But what about the fringe-of-the-fringe, citizens who gathered the requisite 65 signatures and $3,500 filing fee, but didn’t have so much fame or infamy already backing their campaign?

In the interests of a well-informed electorate (and a well-amused one), we at Trash City filtered our way through them, and bring you our favourites. Because of space, and an unwillingness to spend the rest of October working on this, we’ve discounted the Republican and Democratic candidates. Though not without some regret, given quotes such as “single adults are the Rodney Dangerfields of our society” (Rich Gosse), a voter statement that reads, in full, “I breathe” (Kevin Richter), or “former party girl turned Republican” candidate Reva Renee Renz, whose blog has some of the most entertaining pieces on the election I’ve read.

Equally, not every candidate running outside an established party, on an Independent ticket, was entertaining, amusing, or even interesting:

However, while some chose to decry the election – “a media circus with 135 clowns” – I found it a case-study of true democracy in action. Lack of finance should never be a bar to achieving representation, and the sheer number of alternative voices shows a deep dissatisfaction with the established system. Discounting the ‘official’ Democrat and two Republicans, the other 132 candidates totalled almost half a million votes. In these days of ever more homogenized news, I find this comforting – and to every one of those 132, I tip my hat.

#9 (10,949 votes) – George Schwartzman
“Although some attribute my success in part to my ballot position and somewhat similar name association with Arnold Schwarzenegger, be assured this was not the case.” Yeah, whatever. Perhaps part of his surprisingly good showing was because one of the main planks of his campaign was “the need to prohibit handheld cel phone usage when driving”. He’d certainly get my support there. 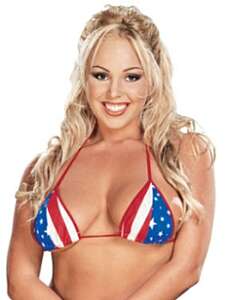 #13 (5,915) – John Christopher Burton
Yes, they have Socialists in America. Just not very many of them. Featuring a bilingual website which is the Internet equivalent of horse tranquilizer, Burton is a civil-rights attorney, who “has specialized in defending victims of police abuse and discrimination”. Clearly going for the law and order vote then. His worthiness is probably exceeded solely by his dullness, which is so exceptional as to be interesting in itself…

#16 (4,864) – Gallagher
Only in America would celebrity status be granted to a man whose act consists, in the main, of smashing watermelons with a sledgehammer. Undaunted by his failure to make Governor, Gallagher – who like Sting, Prince and Satan, prefers to be known by only one name – is now preparing to run for President in 2004. Is probably more credible than most Democratic candidates.

#28 (2,262) – Angelyne
Also in the one-name group, is this Hollywood billboard queen, famous for…er, being famous. Perhaps the most imaginative proposal for dealing with the $38 billion deficit: “A room will be decorated in the Capitol building, for anyone who wishes to spend the night and get a personal tour of the building hosted by Angelyne, for the amount of $10,000.” Which would also get you two dates with Mary Carey.

#33, #41, and #47 (2,007, 1,703 and 1,494) – Ned Roscoe, Ken Hamidi and John J. Hickey
One pleasing thing about the US system is you don’t need approval from a party to run as their candidate. Hence, there are no less than three Libertarians – they’re the group I’m probably most aligned with, whose basic concept is summed up in the quote, “the government that governs least, governs best.” Together, they’d have passed Gallagher for #16, though Roscoe seems mostly concerned about the rights of smokers to kill themselves (and anyone else within breathing room) – I’m sure this is in no way connected to his day job as a cigarette retailer…

#49 (1,454) – C.T.Weber
The candidate of the Peace and Freedom Party which is one of those ‘only in California’ organizations: “a multi-tendency socialist and feminist political party”. Doesn’t sound like the sort of party I’d want to go to. Also describes itself as “the only Socialist alternative”; John Christopher Burton (see above) might want to argue with them about that. Albeit in a peaceful and free way, of course.

#54 (1,288) – B.E.Smith
You’ll notice the lack of a link for this one. That’s because he was one of the very few candidates without an Internet site. Thrown into the 48-page voter’s information guide, we find Smith’s voter statement beginning, “I spent two years in federal prison because I grew medical marijuana for myself and others” – which probably explains both his lack of a website, and his photo (right). He promised to pardon everyone in prison for similar crimes, and if elected, would have refused a salary. But would probably accept compensation in Snickers bars.

#60 and #63 (1,121 and 1,029) – Iris Adam and Darin Price
Like the Libertarians, for some reason, there was more than one candidate from the Natural Law Party, thereby splitting the votes of those who like the idea of “yogic flying” [Somewhere at TC Towers, I still have a videotape of a most amusing Natural Law Party Political Broadcast] I think Adam was the official candidate, and if their votes were combined, they’d have placed in the top thirty. Guess even meditation can’t save a political party from discontented splinter groups. 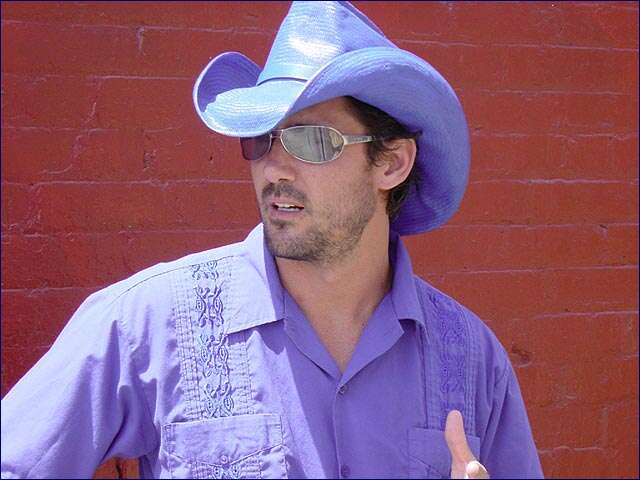 #62 (1,080) – Trek Thunder Kelly
Voter statement in full: “Please vote for me, thus breaking the Seventh Seal and incurring Armageddon. I will legalize drugs, gambling and prostitution so they may be taxed and regulated; the funds derived would subsidize the deficit, education and the environment. I believe in peaceful resolution backed by a strong military; I don’t care who you marry or have sex with.” Wears only blue. Claims to sleep with socks on his hands, and only eat steaks and tacos. Candidature largely appears to be some kind of bizarre performance art.

#68 (927) – Diane Templin
No election would be complete without a religious fruitcake, and with comments like “May the Lord give you the wisdom of Solomon as you vote”, Diane is well qualified. Standing on behalf of the Independent Party (which seems like a contradiction to me, right up there with an Anarchist Party), who regard the census as an invasion of privacy. And probably a tool of Satan, as well.

#74 (734) – Kurt E. (Tachikaze) Rightmyer
A 39-year old who lists his profession as “Middleweight Sumo Wrestler.” Therefore, you will find no snide remarks, sarcastic comments or jokey asides about his candidature here. At least, not until the San Andreas Fault shifts, California is no longer connected to us here in Arizona, and we own Pacific beachfront property.

#115 (374) – Jeff Rainforth
The Reform Party was once viewed as the great hope for a third party in America, after Ross Perot ran for President in 1992, and got 19% of the vote. Ah, how the once-mighty have fallen – going on Jeff’s performance, by approximately 18.99%. Do like the ‘Politicians Suck’ shirt available through his site, though the message is somewhat muted by having ‘Rainforth for Governor’ emblazoned on the other side. 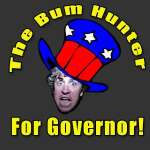 #135 (172) – Todd Richard Lewis
Lewis was one of the players in Bumfights, Vol. 1, where he ran around tying up the homeless while commentating in a fake Aussie accent. “The people of California will rise up in a grass roots campaign supporting The Bumhunter’s run for Governor and take back what’s owed to them – their dreams.” Dream on, Bumhunter: you finished last. Not just among independent candidates, but dead last. And deservedly so.