IFC recently ran a six-part documentary series, chronicling the history of the Pythons, from their beginnings in the Oxford and Cambridge revues, through to Spamalot. It was quite a treat, not least realizing how the troupe was a semi-random collection of people, who gelled into a near-perfect whole for three sublime seasons of television, at a rare moment in television history when the opportunity to make a show like that presented itself.

Of course, as with any sketch-based comedy series, it wasn’t all good: it’s a genre that inevitably lends itself to peaks and valleys, rather than the consistency of things like Fawlty Towers or Blackadder. And, especially in the abortive fourth season, there were plenty of valleys – without John Cleese, the show was lost, and those episodes are the Python equivalent of those Eastern Bloc Tom and Jerry cartoons from the early 1960’s. But the peaks were sublime; both in the TV series and the movies, they created timeless moments of comedy which have rarely, if ever, been matched. It spans generations: my father loved Python. Myself and Chris adore Python. And our son is just as much a fan, who will recite The Four Yorkshiremen at the drop of a dead parrot.

Hence, this list of my favourite Python moments – not just from the TV, but the movies as well, which can hardly be denied their significance in comedy’s Hall of Fame. However, I have excluded stuff from The Secret Policeman’s Ball and its sequels. The hard part was restricting it to ten eleven (for reasons explained later): I could easily have doubled the number without blinking. The link for each title will open a new tab where you can view the sketch in question.

I note that my preference is clearly skewed towards the more verbal side of Python comedy, rather than the physical – I think this is because the slapsticky stuff is rather too well-worn a path, from Charlie Chaplin through to Benny Hill. Hence, sketches like Upper-class Twit of the Year, often ranked highly on other, similar lists, are not ones of which I’m particular fond. It’s in word-play and their use of the English language that the true strength of Python can be seen. They manage to be immensely smart (who else would ever base a piece on summarizing Proust?) without getting pretentious (you don’t really need to know who Proust is to appreciate the results), and that’s a lot rarer than you might imagine.

10. Black Knight (Holy Grail)
The Pythons had a love for and appreciation of OTT hyperviolence – see also Sam Peckinpah’s Salad Days. However, this scene, in which John Cleese’s Black Knight is systematically dismembered by Graham Chapman’s King Arthur, yet proclaims “It’s just a scratch” as his limbs go cartwheeling away from their body, is even more memorable. It’s the contrast between the arterial spray – something not seen in cinema at the time, outside a grindhouse screening of Shogun Assassin – and the Black Knight’s completely oblivious attitude that makes this work. Could also have been Castle Anthrax. Or the French taunting. Or the witch-finding.

9. Always Look on the Bright Side of Life (Life of Brian)
Likely my least favorite of the Python movies, it feels to me like it’s a film with only one idea, which as a result doesn’t have enough energy to drive the film for the entire running-time. However, the ending has to remain one of the all-time greatest in cinema, with the men being crucified alongside Brian, led by Eric Idle, breaking out into a cheerful song extolling the joys of optimism. It shows up in the most unlikely places. In 1993, when the Manchester bid for the 2000 Olympics was (thankfully) rejected in favour of Sydney, the crowd watching in Castlefield spontaneously burst into the song.

8. Mr Creosote (Meaning of Life)
Speaking of “spontaneously bursting”… Perhaps the Python’s deepest excursion beyond the borders of good taste was this hideous sequence, which Chris still has problems watching [she has a thing about vomit, and the sketch has it, by the literal bucket], and which grossed out Quentin Tarantino. Again, it’s the contrast that makes it work: here, between Terry Jones’ obese, obscene restaurant customer, and Cleese’s unflappably obsequious waiter, who is entirely unfazed by Creosote’s behaviour. Again, this is probably more extreme than anything else to pass the BBFC at the time.

7. Argument Clinic
“Is this the right room for an argument?”
“I’ve told you once…”
Thus starts the core of the sketch, which has Cleese duelling with Michael Palin in a pay-per-minute argument, which drifts topic from whether the initial question has answered, over to the very nature of what constitutes an argument. It’s beautifully constructed, though suffers from the frequent Pythonesque problem – they could never work out how to end their pieces, with a punchline apparently being viewed as too traditional. Here, Idle, dressed as a policeman, arrests the show for “simply ending every bleeding sketch by just having a policeman come in.”

6. Spanish Inquisition
Possibly the finest running-joke in the history of running-jokes, it appeared at various points throughout one episode, when a character would proclaim “I didn’t expect the Spanish Inquisition.” This would trigger the arrival of Cardinal Ximenez [Palin] and his useless henchmen, who would attempt to extract confessions with the aid of a comfy chair, after getting all confused when listing the Inqusition’s weapons. The show ends with the inquisitors having to rush across town by bus, to the Dick Barton theme, only to be cut off by the closing credits. Brilliance.

5. Mad Barber/Lumberjack Song
While everyone knows the Lumberjack Song, often forgotten is the lead-in, where Palin’s homicidal barber tries to fake cutting a customer’s hair, for fear it will bring out his psychopathic tendencies (“Cut, cut, cut, blood, spurt, artery, murder, Hitchcock, Psycho…”). He eventually admits, “I didn’t want to be a barber anyway,” which leads to the song. This may be the most famous of all Python ditties, as the lyrics drift from extolling the joys of a life of woodmanship, into the pleasures of wearing women’s clothing – to the disgust of the backing chorus of Mounties.

4. Live Organ Transplants/Galaxy Song (Meaning of Life)
Meaning of Life is the most variable of the Python movies, combining moments of genius with dismal failure. This is the highlight of the film, with paramedics Chapman and Cleese arriving to take the liver of Mr. Jones (Terry Gilliam), even though the donor card says, “In the event of death.” As they respond, “No one who has ever had their liver taken out by us has survived.” His wife (Terry Jones) is asked to sign up, and is convinced to do so by Idle’s Galaxy Song. Most of the litany of astronomical facts it contains, are actually surprisingly accurate.

3. Dirty Fork
One of the few Python sketches with a true punchline – announced, in typical self-referential style with both a voice over and caption saying, “And Now… The Punchline!” Naturally, the punchline is not up to the level of the rest of the sketch, which features an escalating series of absurdity, after a restaurant diner (Chapman) complains about a dirty fork. By the end of the sketch, the restaurant manager (Idle) has committed fork seppuku, the chef (Cleese) has to be restrained from attacking the patrons with a cleaver and the waiter (Palin) is clutching a war wound in his head.

2a. The Four Yorkshiremen
I’d completed the list when I suddenly remembered this one. I refuse, absolutely, to lose the Black Knight, so have just gone ahead and inserted this in the appropriate place. On the other hand, it isn’t technically a Python sketch, since it was written for At Last The 1948 Show, with the writer-performers there including Tim Brooke-Taylor and Marty Feldman, as well as Cleese and Chapman. However, its presence in Live at the Hollywood Bowl and elsewhere has made it part of Python canon, though other enactments have included participants from Rowan Atkinson to Alan Rickman.

2. Nudge Nudge
Eric Idle plays the over-friendly stranger in the pub, who slides up to Terry Jones, enjoying a quiet, solitary half-pint, and proceeds to ask a series of questions about his wife that gradually become more and more innuendo-laden. Idle tries to appear as the man of the world, but the punchline – as in Dirty Fork, a rarity – completely shatters that illusion. It was originally written for Ronnie Barker, but was rejected. The dead-pan delivery by Jones of his responses, as he (deliberately?) refuses to see what Idle is getting at, is what really makes the sketch so memorable.

1. Dead Parrot
Not just the greatest sketch in Python history, but possibly also the greatest sketch of all tine. An it’s not just me who thinks so, as the sketch topped the IFC/Nerve list of the 50 All-Time Greatest, ahead of Who’s on First? and the entire output of Saturday Night Live. It may also be John Cleese’s finest moment, and given the sublime wonder which was Fawlty Towers, that in itself is quite an achievement: he works himself up into a frothing fury, in the face of Palin’s relentless denials that there is anything wrong with the obviously-demised avian. Has been performed in a number of ways by the pair since: for your amusement, here’s a link to one where Palin can’t stop laughing. But, for your amusement, here is the original version, in its entirety. Enjoy. 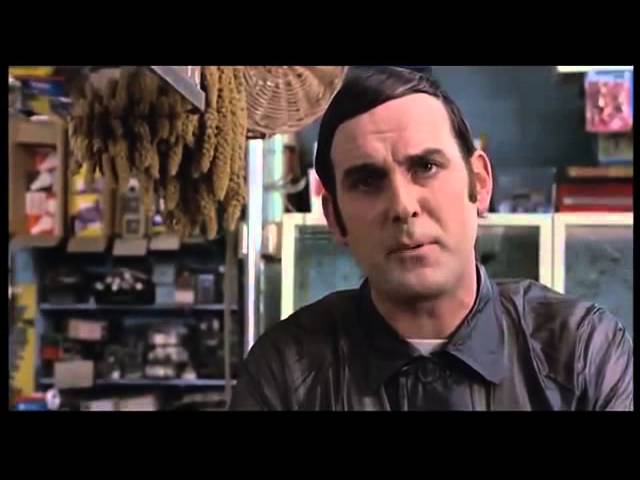