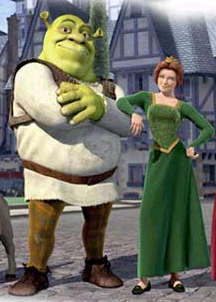 Well, everyone and their web-able mother are putting out previews of this summer’s movies. So why should we be any different? Here’s the TC guide to what we have to look forward to over the next four months (here in Phoenix, anyway – check local press for details, as they say). Be sure to check back at the end of August, when we’ll no doubt be terribly embarrassed by our selections. [And the links now go to the appropriate review. Christ, I can’t believe we were actually looking forward to Rollerball]

Sure thing: The Mummy Returns (May 4) – follow up to one of the most successful brainless popcorn consumption devices in recent years. Expect more of the same plus WWF’s The Rock (even if we knew he’d lose at Wrestlemania, since he’d be off doing promotion).

What we’re looking forward to: Shrek (May 18) – anything which takes pot-shots at Disney, with a villain strangely reminiscent of Michael Eisner, has to be worth seeing, even if Eddie Murphy’s sidekick schtick is not exactly breaking new ground.

Dodgy ground: A Knight’s Tale (May 11) – we’ve never been able to take medieval movies seriously since Holy Grail, and this looks pretentious as hell. And it has modern rock music behind the jousts! Sure it seemed like a good idea to someone.

Please bomb…please bomb: Pearl Harbor (May 25) – World War II didn’t star until 1942, after Ben Affleck sorted out his love-life. This desperately wants to be Titanic: a love story cunningly disguised behind an action-packed trailer. Let’s hope it doesn’t succeed. 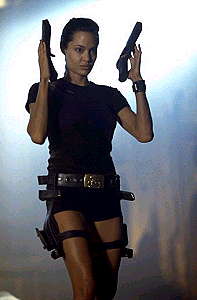 Sure thing: A.I. Artifical Intelligence (June 29) – it’s Steven Spielberg. It’s got a kid in it. And not just any kid, the one from The Sixth Sense. Mind you, recently, for every Saving Private Ryan there’s been an Amistad or Lost World.

What we’re looking forward to: Tomb Raider (June 15) – you expected perhaps something else? Angelina Jolie running around for 90 minutes, firing guns. Yes, we know all about computer game movies. I just don’t care. Will be there on the Friday for this one. Maybe Saturday too.

Dodgy ground: Evolution (June 8) – a bunch of goofy scientists save the world. David Duchovny has shown no ability to carry a movie without an “X” in the title. A lot will rely on the special effects here, which is thin ice for big success.

Please bomb…please bomb: Swordfish (June 8) – two of the less interesting X-Men (Jackson and Berry) team up with Travolta. It’s been fun watching Travolta’s overpaid and overhyped career explode in his face since Battlefield Earth, so fingers crossed this continues the trend. 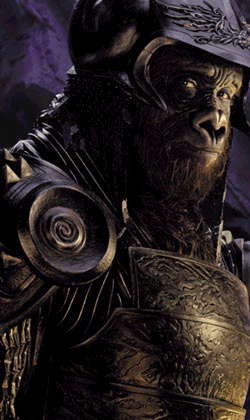 Sure thing: Planet of the Apes (July 27) – as soon as we heard Tim Burton was on board, it was so obvious, in a smack your own forehead way. No doubt, this will look fabulous – however, will they be able to replicate the fabulous ending of the original?

What we’re looking forward to: Final Fantasy (July 11) – see previous qualms about computer games, yet there were moments in FF7 which were genuinely moving. If they can capture that spirit, and with undeniably jaw-dropping CGI, this could be the genuine groundbreaker of summer. Outside shot: just saw a trailer for Cats and Dogs which pits live-action kitties and pooches against each other, somewhere between Austin Powers and Mission Impossible. It looked fabulously crass and funny. Whether it can sustain it for ninety minutes, rather than ninety seconds…

Dodgy ground: Scary Movie 2 (July 4) – an idea which was initially fabulous, was already seriously running out of steam by the end of the first film. How many recent horror hits have there been for it to parody? I sense a departure into general movie parody territory: anyone remember Mafia!?

Please bomb…please bomb: Jurassic Park III (July 20) – enough with the dinosaurs already! What was once new and impressive has become nothing more than another studio franchise. They’re extinct: get over it. Though I can see how CGI dinosaurs would be better than having to deal with Demi Moore.

Sure thing: Rush Hour 2 (August 3) – this time, they’re in Hong Kong, so expect a lot of Chris Tucker-out-of-water gags. Otherwise, expect the same as last time – aimiable comedy, in which Jackie never gets out of second gear – and we cruise to another $100 million gross. 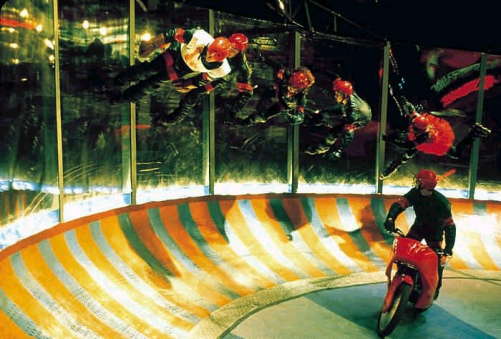 What we’re looking forward to: Rollerball (August 17) – while remaking classic films is often a recipe for disaster (Get Carter), this has potential, and the subject matter is even more fitting in these days of media conglomerates. From the director of Die Hard? Might just work.

Dodgy ground: American Pie 2 (August 10) – seems like the gross-out sex comedy has had its day, going by the grosses for the likes of Saving Silverman and Tomcats. It may not just be the apple-pie that gets screwed here, more like a few movie careers.

Please bomb…please bomb: Ghosts of Mars (August 24) – Carpenter’s career has been running on fumes for years. Since They Live, he’s batting 0-for-5; it’s a miracle any studio will touch him. He’s planning Vampires 2. Will someone please stop the man before he hurts others?