Vijay Amritraj. Good tennis player. Top Asian for 14 years, reached the Wimbledon doubles semis with his brother. But an actor? That he has a supporting role here tells you something. That he doesn’t stand out as particularly awful tells you more about this semi-Bond wannabe, that wavers between jaw-dropping incompetence and incoherence. We know we’re in trouble from the opening credits, featuring Kosugi (a low-rent Sonny Chiba at the best of times) doing kata surrounded by leotarded ladies, in a bizarre yet chaste 007 ripoff. It even has a strikingly crap song, strangely comparable to All Time High.

Set in the Phillipines (another reason for bad movie fans to sit up), it starts with a busload of tourists being kidnapped by terrorists, having missed subtle warning signs such as a man in dark glasses by the road-side muttering into a walkie-talkie with a three-foot antenna. Mind you, given the stultifyingly banal tour guide, I’d be grateful for the diversion: once the native dancers appear, capture by sadistic goons would seem a welcome alternative. This is especially so, when the leader of the gang is named – and we rewound the film to check this – Colonel Honey Hump. She is a lesbian, naturally, though one for whom English does not appear to be a familiar tongue, going by her performance. 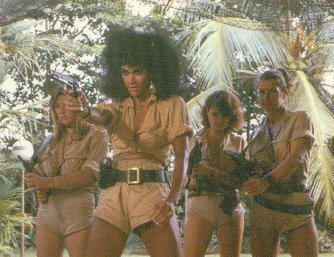 She is, however, a model of restraint and understated acting, compared to her boss, Alby the Cruel. He is German (why he is in the Philippines is never made clear), in a wheelchair, and has a monkey with a diaper in lieu of the traditional white Persian. Played by the wonderfully-named Blackie Dammett – let’s just say that again: Blackie Dammett (in real life, the father of Red Hot Chilli Pepper Anthony Kiedis!) – he has kidnapped the group in order to force the release of Arab terrorist Rahji the Butcher, a character whose dialogue consists almost exclusively of “BWAH-HAH-HAH…”

To rescue the hostages, the government call in the DART team, a threesome led by Spike Shinobi (Kosugi), although not until he has a flashback on a sun-lounger (why does he take his samurai sword with him poolside?) during which we learn he was expelled from Ninja Academy for letting his emotions get the better of him. You may be excused for thinking this is an Important Plot Point. Don’t bother: it is never referred to again. Chief sidekick, Steve Gordon, is played by Brent Huff – with his roles here and in Gwendoline, he is the first man to have starred in multiple Incredibly Bad Films, alongside actresses Sybil Danning and Yukari Oshima. [Michelle Bauer has managed three, but two were minor roles]

Our heroic trio end up in a museum, where they are attacked by midgets. It’s sentences like that one, which keep me going through all the long, dark dull movies, y’know. Despite having all his dialogue dubbed, Kosugi looks suitably flummoxed by this. Well he might, as a fall of perhaps a yard, tops, kills the guy they’re after, even though he lands on his feet. They don’t make villains like they used to. “That was his last jump,” adds Shinobi cryptically.

Despite the presence of an international hostage crists, the good guys take time out for a few drinks, and seduction in Gordon’s case. But Alby and his henchmen have turned the Phillipine jungle into a Bavarian drinking hall too, so they’re not exactly losing ground. The government, however, is left with no option but to release Rahji. Who, in keeping with fundamentalist terrorist tradition, heads straight for the nearest whorehouse, pausing only to exchange his car for a horse and buggy. 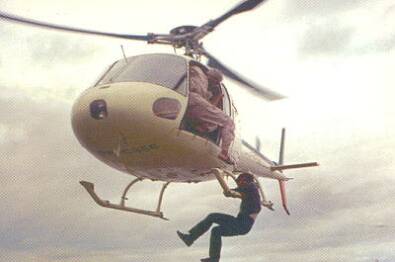 Tracking the manic laughter, Shinobi follows Rahji, clings to the escape ‘copter, throws him from it, visits a floating brothel, leaps overboard, is chased by scuba divers (clearly always on standby) and finds the terrorists. Thus passes the middle 1/3. We know we are heading towards the final, climactic, all-out assault but get two classic lines first: “It would take a tougher man than you to pull apart industrial epoxy” and, “Do you understand? PIG HEADSSSS!” from Colonel Hump.

The end battle has an almost Zen-like approach. Witness the following sequence:

This is cinematic genius on a par with Welles or Lean – the midgets earlier suggest Alston may be a pseudonym for Fellini. I note that “Alston” has not apparently worked on anything since Fellini died… 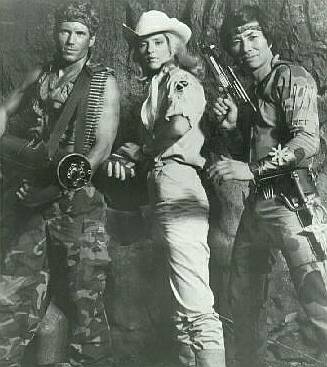 By now, we are deep into “Eh?” territory, with Shinobi fighting evil ninjas for no readily apparent reason – between Germans, Japanese, Arabs and the locals, it is truly a terrorist United Nations. Rahji is dispatched with a detonator in the mouth, while Alby is trampled to death by a herd of stampeding polo ponies. At the risk of repeating myself, sentences like that sum up the reasons we lurk in the “under $10” section of less-discerning movie outlets: an unfettered imagination is a good thing, and when it goes utterly berserk, it’s even better. One can only wonder at the script meeting where they came up with this ending for the villain.

In keeping with traditional badmovie ethics, the title is meaningless, as far as I can tell, since at no point in the film do nine ninjas die. The German title translates as Nine Lives of the Ninja, which might make more sense. But what else would you expect from a film where Shane and Kane Kosugi play characters called Shane and Kane, while Vijay Amritraj plays one called…yep, you guessed it, Vijay. There’s one extraordinary appropriate line from the film that sums up the whole surreal experience: “Too many drugs this time, boys, too many drugs.” For the makers, perhaps – for Chris and I, not even a 151-proof rum-soaked pineapple proved sufficient to mask all of this film’s delicious flaws.