“Anyone who experienced that catastrophe and survived, would never go there again…”

The above line is one of the many lines of narration spoken during The Creeping Terror, but is just as appropriate a summary for the entire movie itself. While there can never be a unanimous choice for the worst film ever made, going forward I will refuse to take seriously the views of anyone who does not at least acknowledge the credentials of this as a worthy contender. I’ve seen films with bad sound, poor special effects, amateur performance or any other number of flaws. But this tale of alien invasion is so inadequate in so many areas, it’s difficult to conceive how it could ever have seem adequate.

Almost from the get-go, you get a sense of how bad things are going to be. The shot of the alien spacecraft descending to Earth is, very obviously, stock footage of one a V-1 rocket taking off, played backwards. Yes: really. That the makers thought no-0ne would notice, or that the craft seen on the ground bears no resemblance at all to the the stock footage, sets the bar of expectations appropriately. The next thing to kick in is the narration, and its use may mark a new low-water mark. Even at best, it’s a dodgy technique, usually a replacement when the director’s skills aren’t up to the task of showing the necessary emotion or conveying the plot points in a less-clunky manner. Here, it seems a technical necessity caused by insurmountable audio issues: two characters will be having an animated conversation, but rather than hear them, the narrator describes what’s being said. It feels like the narrator is reading an early script treatment.

Let me provide a couple of samples to show you what I mean: 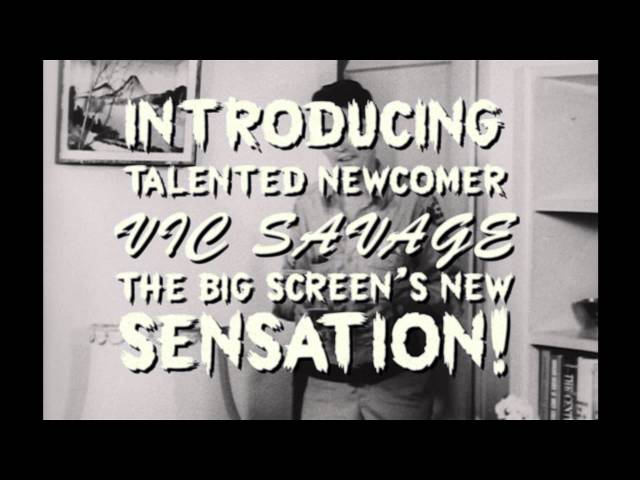 However, what elevates this, more than any other aspect, lifting it from the realms of “Somewhat Sucky” into the pantheon of all-time greats, is the monster. I’d heard tales of this cinematic abomination, but nothing could prepare me for the amazing sight. At first, it was largely hidden behind some trees, but it seemed as if the makers finally realized the pointlessness of trying to conceal the thing, and opted instead to give the audience plenty of opportunity to play “Let’s laugh at the monster.” The general consensus is that it resembles a pile of carpet remnants, and who am I to argue with that? It appears to consist of a man under a blanket, pulling a large quilt behind him.

It’s reported that there were actually two different monsters used – if you look closely, you can tell the difference. The reason for this has also been explained: “According to actor/makeup artist Byrd Holland (who played the sheriff), Lackey was banned from the set by Nelson after a dispute over the ownership of the monster “suit”, whereupon the monster suddenly went missing. Lackey supposedly informed the crew that the monster was “in hiding” and would not reappear until he got paid. Apparently Lackey never got paid and Nelson decided instead to rebuild the monster on his own.” Hard to tell whether this was a boon or a bane: neither is exactly going to give Rick Baker sleepless nights.

There are two factors which render it particularly non-terrifying. While that half of the title is singularly inappropriate, there can be no doubt that it certainly lives up to the ‘creeping’ part. It moves at the pace of a reluctant sloth on downers, and the only way it can consume anyone, is because they stand still and let it. It is not necessary to run away. It not even necessary to walk away. You could amble, and still comfortably out-pace  the alien. The other issue is that the creature’s mouth – at roughly the level of the man in the front’s knees – is basically a hole. Due to this, the only way for a victim to be swallowed is if they obligingly climb into the mouth, then more or less pull themselves down its throat.

I am also somewhat confused by the sounds it makes, which appear to resemble stock audio from a big-game hunt, though I am impressed that it can make them even while swallowing its prey. However, the creature’s finest moment probably comes later in the film, when it attacks a group of cars parked in the local Lover’s Lane. While absorbing its victims, at one point it climbs into a convertible (shown, right), and for a glorious moment, we imagined the alien driving off in the automobile, the wind blowing in its…er, shag-pile.

This is, however, only slightly more entertaining than the preceding sequence where it attacks a local dance-hall, apparently managing to avoid the cover charge (probably claiming it was “on the list”).  The same people who were frantically fruggin’ their hearts out on the dance-floor, now find themselves incapable of any motion at all, and the creature eats its fill. A particular highlight is the guy who gallantly pushes his date towards the monster, though I also enjoyed the town drunk – one of the few people with an excuse for not being able to move out of the way. There is reportedly also a ‘wardrobe malfunction’ in this scene, with an escapee throwing a woman out of the way and accidentally tearing off her top. I can’t say I am curious enough in 60’s b&w boobies to investigate further.

There are any number of other aspects worthy of derision, but I’ll just mention these in passing. The way the alien craft contains very clearly terrestrial dials with Earthly numbers (below). The shot of the hyper-secure crash site, where you can see a kid playing in the background, oblivious to the camera.  The tactics of the army [or, at least, the single-digit number of soldiers we get here] against the monster: even though attacking across open ground, they bunch up into an area no larger than an elevator, so that it can gobble them up as well.  Gratuitous, and apparently serious, use of the word “hootenanny,” followed by offensive use of a guitar, the likes of which would not be seen again until Animal House. The way the hero and heroine invite the hero’s best friend over, simply it seems in order to make out in front of him. The fat guy who bears an odd resemblance to Harry Knowles, and is tripped up by some pesky river-bed gravel.

The weird thing is, there is actually the potential for a half-decent movie here. The creature is very different from most aliens of the time, and its purpose here – absorb humans to find out their weaknesses, so it can transmit them back to its home planet as data for a future invasion – is inventive too. It’s the kind of movie begging for a remake, perhaps with a nod to how the original was actually government disinformation, designed to cover up a real incident by creating a target of ridicule. However, I am fairly sure I came up with better ways to use a concept like this when I was writing stories aged seven or so. You can see why the MST3K crowd pounced on it, but it’s one of those cases where there’s not really much more they need add: the film’s insane stupidity doesn’t need much in the way of commentary. Not that, of course, this stopped us adding our own.

But as a bad movie, it’s an awful lot of fun, fully deserving its reputation in the field. After a spell where I’d been grinding my way through dull films, it was a refreshing delight to come across something like this, possessing in spades the loopy charm which attracted me to the field of incredibly bad cinema to begin with.