Christmas with the Klan. I’m Pregnant by a Transsexual. Get Your Mitts Off My Man. And not to mention the infamous, I Married a Horse. Ah, there is nothing quite like the American talk show in its finest, most distilled form: The Jerry Springer Show.

I’ve been a fan since first stumbling across the My Teen Worships Satan episode, in a Phoenix hotel back in October 1997. But Springer has been delighting his fans, and appalling everyone else, with a steadily- mix of softcore sex ‘n’ violence, and hardcore freakishness, providing an insight into the shallow end of the gene pool, that horrifies and amuses in equal measure.

We recently rediscovered the show, courtesy of Chris’s mother, who used to sit in the living-room and watch, calling us through for any particularly startling moments. Now, we have a tiny portable screen of our own in the kitchen, and it’s somehow appropriate to watch it in flickery Grey-o-vision. The show’s credits start zooming down a back-street alley, to a trash can with a television set in it… it’s clear Springer isn’t taking himself too seriously.

It seemed a little restrained, compared to what I used to remember, and a comparison with The Best of Jerry Springer tape revealed this not to be mere nostalgia. Though if the violence was trimmed, every other guest took their clothes off instead, usually for no readily apparent reason. And, in a lot of cases, you would be looking for severe and detailed explanation to justify seeing these citizens in the flesh. 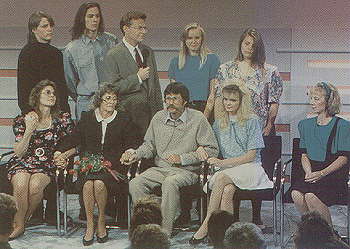 As the photo at left shows, it hasn’t always been so: back when the show started in September 1991, Jerry was just another talking-head. It was only really when executive producer Richard Dominick came on board in 1994, that the direction changed, and things gradually evolved from there. The show is a cocktail of multiple ingredients, without which, while it would still work, the taste would be that much poorer.

Speaking of wrestling, the question of fakery has to be addressed – though personally, it’s no more relevant to my enjoyment of the show than whether The Rock and Steve Austin really are mortal enemies or not. The lines are more blurred on Jerry, however. While rival channels irregularly reveal guests who are not what they claim (“I was [supposed to] be with someone for two and a half years and I was cheating on him with my photographer. I didn’t even know the two guys.”), there certainly are some real guests involved. In July 2000, only hours after the broadcast of an episode entitled Secret Mistresses Confronted, the body of one participant was found in Florida. Another guest, the victim’s former husband is currently in jail awaiting trial for her murder. If this is fake, it’s pretty convincing.

This kind of escapade is why the show represents something of a dilemma for Jerry’s masters at Studios USA, the company that produces and distributes the show. On the one hand, it is a major cash-cow for them, bringing in an estimated $30-40 million per year. Springer even did what no other talk-show in the 90’s managed – he dethroned Empress Oprah from her position atop the ratings, even in previously untouchable demographic groups, such as the prized “women, 18-34” category.

On the other hand, its controversial nature and ability to attract criticism has proved an embarrassment, particularly to head honcho Barry Diller (though hard to see how the man who also owns QVC and the Home Shopping Network could really complain about quality). In April 1998, they vowed to “eliminate all physical violence from the series”, and in May 1999, they said, “We will produce and distribute a program that we feel is responsible – no violence, physical confrontation or profanity.” 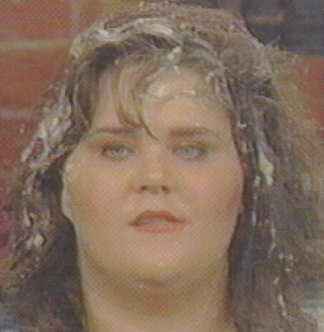 The month after the latter statement, they even started shopping the show around to other distributors, hoping to offload what they perhaps say as an embarrassing member of the family. In the end, however, they held onto the show, and though ratings dropped, it now remains a steady #2 behind the Book Club Queen, and is still vastly entertaining.

Though the glory days of I Married A Horse – their never-aired bestiality special from May 1998 – are now perhaps behind it, even in this (slightly!) toned-down version, the show still remains a glimpse into bizarre corners of Americana. Despite what scarily bland shows like Friends would have you think, to quote Richard Dominick, “Life isn’t just a bunch of white, middle-class people living in the city.” For reminding us of this, Jerry Springer and his team can only be applauded.