“I think it would be awful if people just thought, ‘Yeah, it’s okay’; that would really hurt my feelings.” 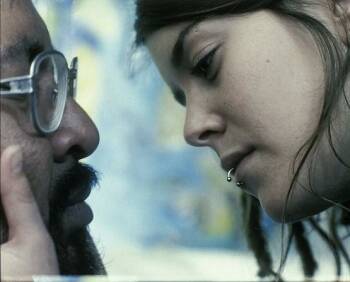 Regardless of whether you like it or not – and opinion is certainly divided on the film’s merits – Carlos Reygadas’ Battle in Heaven is undeniably one of the more memorable films of 2006, from the first shot to the last. Shot with a cast of non-actors, it tells the story of Marcos, a chauffeur, and his love for his passenger, Ana – their relationship takes a darker turn, when a kidnapping staged by Marcos and his wife goes wrong. But Marcos is the only character who knows Ana leads a double life: although a child of Mexico’s political elite, Ana amuses herself by working as a prostitute in a high-end brothel.

Largely because of its unflinching depiction of sex – which does not follow the usual Hollywood “pretty bodies” approach – controversy has inevitably followed Battle, from Cannes, through an enforced shift of its screening location at the Sundance Film Festival [it was originally scheduled to be shown in a high-school!]. And, with its release earlier this month by Tartan Video USA, it doesn’t look likely to provoke more discussion, especially in a country which still lags some way behind in terms of sexual openness (see the “censored” cover art necessary here, below). We spoke with Anapola Muskadiz, who plays Ana, about the film.

Trash City: Firstly, I have to admit, we haven’t actually seen the film yet. So all we know about the film is what we’ve read, and from seeing the trailer. Now, this might be a good thing, in that I have an open mind. How would you describe the movie?
Anapola Muskadiz: I don’t think I want to answer that. Cinema is a crazy process. A movie is a movie, and depending on your mood, the film can go in any direction.

Mushkadiz isn’t a Mexican name?
It’s a pseudonym. I write poetry and that’s my poet’s name.

How did you get involved with the film?
This girl I know went to the casting, and she gave my phone number to the director when she heard what they were looking for. From what Carlos says, he liked my energy.

Did you see a script?
I just saw an outline on one page, and it was very different from what the story turned out to be. It was really spontaneous – not really improvisation; Carlos would tell us what to do, but not how to do it. The only condition was not to make faces, and not to act, just behave in the most natural way.

Is your character, Ana, like you?
The character is me. What Carlos wants – why he doesn’t work with professional actors – it that he likes what a person can create. He wants the energy and spontaneity that can come out when the camera is in front of them.

Why do you think Ana works as a prostitute?
I don’t think there’s one single reason. She might feel a void inside of her, or like sex a lot – or simply knowing that she’s pretty and wanting to take control of it and use it as a tool.

The relationship between Ana and Marcos is complex – what are your feelings about it?
It’s an amazing relationship. One of the things I liked about the film is that it’s completely open-ended. A Battle in Heaven can go any way. It can be anything from her being really mean and taking control of their lives, to a very tender relationship, where she understands that he is in love with her. It’s really complex, but it’s not one thing – it can be all of them.

How have your family and friends reacted to the movie?
Some of my friends like it, others don’t. My Mom really liked the movie. It was great to share the experience with her. For my dad and brother it was a little bit harder.

Do you want to continue acting as a career?
I still feel I want to work on my art and my poetry. I don’t think I’ll make it my main career.

You went to Cannes – what was that like?
It was great to see all the work we did end up in Cannes. It took a lot of time and energy – we shot for almost six months – and it was good to see the results end up in Cannes. As for the rest, it was just a big party!

How would you sum up the film’s message, and what do you think about the religious elements?
For everyone, it has its own message. I don’t think that it’s particularly about religion and Catholicism – more about how, once you commit a crime, you can’t go back, and you look for a “superior force”, outside of yourself, to help. Plus, how important faith – especially blind faith – is in society.

The reviews seem deeply split: it seems to be a film people either love or hate. What would you say to someone who hated it?
I think it’s great. I think it would be awful if people just thought, “Yeah, it’s okay”; that would really hurt my feelings. As long as they love or hate it, that’s the beauty of art. It’s what all art is trying to do – create strong emotions.

[Tartan Video USA released the film on May 7th, with the DVD including a behind-the-scenes documentary, an interview with the director and clips from his first film, Japon. Subsequent to the interview, we have now seen this film: it’s reviewed here. Many thanks to Debbi at Tartan for arranging the interview, and Anapola for putting up with our ignorance!]