Los Angeles may be the ultimate American city: sprawling, polluted, ceaselessly bustling, capitalism distilled to its highest degree. Unlike Las Vegas, which is fun to visit, but you’re always grateful to leave, Los Angeles is a chore, but a strangely seductive one. The cause this time was ScreamFest, a horror movie festival in which Cradle of Fear was screening – we (in our role as American ambassadors) were there to flagwave, pick up the print afterward, and hopefully sell the theatrical rights to Miramax for $3 million.

Step one on arriving at LAX is always: hire a car. Los Angeles has a public transport system befitting its role as the quintessential American metropolis, i.e. it sucks. On a previous trip, we naively tried using it to get from the airport to Hollywood Boulevard. This is not a mistake we will repeat, after a tortuous, lengthy, tense journey through some highly scenic parts of South Central LA, during which this poor, transparent-skinned Scot (a veteran of 10 years on London Transport) felt particularly touristy. 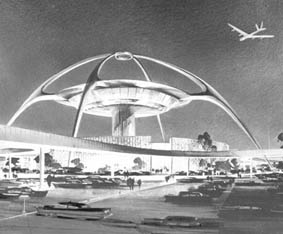 While waiting for your courtesy bus to the car hire place, you can admire the ‘Theme Building’, an unimaginative name for a bizarre architectural feature which dominates the centre of the airport. Rising on spidery buttresses 135 feet off the ground, it resembles something out of Thunderbirds, or perhaps the lair of some Bondian supervillain, cunningly hidden in plain sight at an international hub – there being no dormant volcanoes to hand. No surprise the architect’s brother was art director on War of the Worlds; it’s now a space-themed restaurant.

Once automobiled, you then have to cope with LA’s notorious traffic, and you begin to see why…well, why you can’t see, the Hollywood sign being invisible from downtown due to a haze of smog. Even the carpool lanes are choked more often than not, and at times the traffic approaches London standards of sloth. Which is akin to blasphemy in a city – and indeed, nation – dedicated to cars with such zealous ferocity, that our daughter believes it is her constitutional right to be given a car on her 16th birthday. You could kill the time by listening to the radio, but LA radio is about one-tenth as diverse as here in Phoenix, unless you’re a devotee of thirty different flavours of Mariachi music.

We spend most of our time up near Hollywood, as that’s where most of the stuff we’re there for (concerts, film festivals, etc.) takes place. Accommodation-wise, there are two kinds of hotels to be found up there: extortionate, and recently condemned. The latter are perhaps more fun: not to occupy, heaven forbid, just to poke your head round the door for a look-see. There are places which look like the DEA will be storming in any second now. There are places which look like the DEA just left, and didn’t bother to tidy up after themselves. Others aren’t so well-kept. 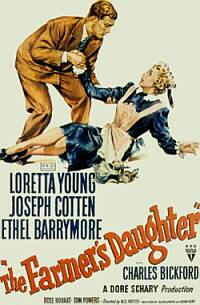 Shining out like a beacon among all this is the oddly-named Farmer’s Daughter – which made more sense when we realised it’s beside the Farmer’s Market. We never actually stay in any hotel much – what’s the point of travelling if that’s all you’re going to do? So the Daughter has everything we need in a hotel room – a bathroom (for Chris), a TV (for me) and a bed (for both of us) – without requiring co-funding from three major film studios to stay there.

It also had the advantage of being just down the road from the ScreamFest theatre. Though we didn’t spend much time there either; despite the fact we had paid out of our own pockets to have the Cradle of Fear tape FedEx’d there, the reaction we got was of the “air-conditioning on full” version. We were grudgingly added to the guest list…for our own movie. Whoopee. Took a program, to see if there was anything we wanted to pay them $10 to see, but it was entirely devoid of information on the actual films. The organiser did devote half a page to her own biography, however, which probably says more about things than we should. The movies we had heard of, were either elderly (The Hills Have Eyes) or sucked (Kolobos – a film which had already been stinking up Blockbuster shelves for a year before the festival showed it!).

Fortunately, what ScreamFest lacks in friendliness, information and good movies, the rest of Hollywood has in abundance. Well, except for the friendliness bit, perhaps. Phoenix may be the sixth-largest city in America, but there are maybe a dozen screens that aren’t devoted to Hollywood blockbusters. Everything plays in Los Angeles – even if it’s only for a week. Where else can you get to see bizarre Japanese horror-musicals on the big screen? Pick up one of the free papers, such as LA Weekly for full details, and to mop up the drool. 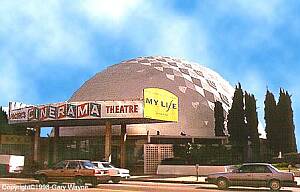 Certainly, as cinemas go, the Cinerama complex on Sunset Boulevard is impressive, albeit one of the most expensive – $14 for a Sunday lunchtime screening! Seen in the pic as it was in its heyday in the 1960’s (it opened with the premiere of It’s a Mad, Mad, Mad, Mad World), it’s now the focus of an arthouse multiplex, where you get the feeling they take the “art” part Very Seriously – it’s one of the very few cinemas I’ve been to in America which has assigned seating. Over-loud confectionery crunchers are likely taken outside and summarily shot, but you’ve gotta love a place which warned us sternly that if we were five minutes late for the movie, we wouldn’t get in.

Between screenings, we like to spend our time in Amoeba Music, a cavernous second-hand media store on Sunset Boulevard. Particularly fine is the upstairs selection of DVDs, though you have to watch your shins. Bin after bin of sub-$10 discs lurk on the floor, and you must gingerly pick your way past the other browsing shoppers sprawled down there. Better yet, join them…

Also worth a visit are the La Brea Tar Pits, still sucking in local fauna (and getting a nod in Ice Age). If, like us, you’re a fan of Miracle Mile, you’ll probably just want to meander around the area, sobbing gently to yourself about diamonds. The diner from the movie is nearby, on Fairfax, but is no longer open – one of my treasured possessions is a menu from when it was still functioning, albeit without a phone booth outside.

Man cannot live by film alone, however. Getting sustenance can be a time-consuming task, with one place quoting us a ninety-minute wait for a table. Even the Bar-B-Q establishment next door quoted us 45 minutes, but that was nothing a couple of alcoholic beverages couldn’t handle. One rule we liked was that all restaurants must post their health inspection scores in the window: A, B, etc. Keep an eye out, see if you can spot any D’s…