Strolling through a dollar store here in Phoenix, earlier in the week, my attention was drawn to a stack of brightly-coloured boxes. On closer inspection, they contained uber-cute marshmallow chicks, almost fluorescent in their artifical yellows and blues, oozing succulent sweetness from every centimetre of their lovableness, right down their little edible-wax eyes. This was my first encounter with Peeps.

But certainly not my last brush, for come Easter, they are omniprescent as Cadbury’s Creme Eggs are in Britain. At that time, they are the biggest non-chocolate confectionery item in the United States, and while efforts have been made to extend the range to other times of year, with Christmas trees, pumpkins and hearts, it is at Easter that Peeps really come into their own, both as chicks and bunnies.

“You bite their heads off,” informed Chris helpfully. I was aghast. How could anyone be so cruel to something so innocent, cute and adorable? Particularly when made by a company with the decidedly double-edged name of Just Born [I later discovered that the company was called this, not as some kind of sick joke, but after its founder, Russian immigrant Samuel Born.] But biting their heads off is not by any means the worst fate that can befall a Peep. 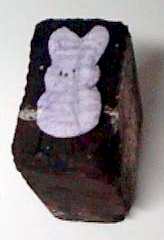 Certain twisted individuals, in the name of “science”, have performed animal experiments on both avian and rabbit varieties. Popping them in a microwave is the most common method of testing, causing them to blow up to a grotesque parody of their former selves. Liquid nitrogen, bricks and lasers have also been used in this senseless torture. I was, however, more than a little worried to discover that peeps are insoluble, not just in water, but in sulphuric acid, which does beg the question – what the hell happens to them in your stomach?

Nutritionally, they are intense. Although they are pleasingly free from fat, they are pretty good at leading to fat, with each Peep being 32 calories of sugar-blitzed madness – and you can never just eat one. For some, even an entire packet isn’t enough. Now in it’s fifth year is an annual ritual called the Peep-Off, where participants compete to see how many they can cram down in thirty minutes – plus a five-minute post-Peep period where vomiting will disqualify a competitor (or at least, “If you puke, you have to eat the puked Peeps to stay eligible,” according to the organiser). The record is a frankly-disturbing 88. 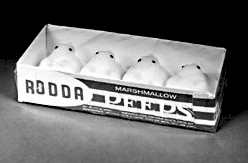 There’s no doubt that Peeps have been big business, ever since 1953, when Just Born took over another sweet-maker, Rodda, and began streamlining their process for Peep-making. Nowadays, their factory in Bethlehem, Pennsylvania is capable of turning out 3.8 million of the little critters a day, with some six hundred million being sold over the Easter period. The process takes six minutes from the first squirt of marshmallow, throgh the dotting of the eyes, to the last rustle of the cellophane.

Why it’s such a hurry is a mystery, given they have a shelf-life of two years, and it’s estimated that one in five consumers prefer them stale, with some even liking them frozen solid. Roast, or used as a pizza topping are other ‘unusual’ possibilities. More generally, yellow Peeps are the most popular, followed by pink, lavender, blue and white. 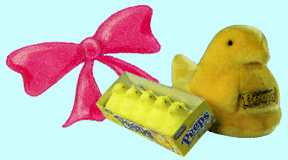 While Just Born have a fan-club, it’s the unofficial devotees who are perhaps the most interesting, with the cult of the Peep continuing to grow. The Internet has provided an outlet for all manner of individuals, from the sublime to the ridiculous – even the NASA web site has Peep content. Art, science, cuisine – there’s almost no area of popular culture Peeps have not touched, though they have yet to achieve the level of movie product-placement as Twinkies – despite the efforts of some Netizens.

Speaking of which, like Twinkies, they remain an almost exclusively American product, though an attempt was made to introduce them to Britain in 2000. As part of the promotion, Just Born ran a website survey to find out “which notable British personality best illustrates the Peeps character and style.” The winner was Benny Hill, with Sir Elton John in second place. I confess I would be interested to discover whether the latter swells up to four times his size in a microwave oven…