Oh, boy. Here we go again. Another day, another moral guardian pops up to condemn a game. Except, here, we’re not even talking about an actual game – just a trailer for one. I heard about this through a Google News alert, which brought me to this article on Forbes.

The blogosphere has tried the Hitman: Absolution trailer and it has been found guilty. In it, a group of female assassin’s dressed as hyper-sexualized nuns are brutally murdered by the ultra-masculine 47. It’s juvenile, brutal, an affirmation of every problem that video games have with women and an affirmation of the worst aspects of our culture.

I’ve never played Hitman – I saw the movie, which largely sucked, and think I spent a post-Thanksgiving sloth watching our son try to get through a mission. I seem to recall falling asleep, though that may have been as much the turkey overdose  as the game.  But, ooh! “An affirmation of the worst aspects of our culture”! I wanna see! Oh, dammit: I’m on my lunch-break. Better wait till I get home.

But in the meantime, of what did “the blogosphere” find the trailer guilty? Let’s click on the link, shall we? Turns out “the blogosphere” is apparently a guy in Melbourne called Brendan Keogh. Not sure what his qualifications are. He’s “a Media and Communications PhD student”, which I personally read as “too lazy to get an actual job.” This conclusion is confirmed by the “Occupation” listed on his profile: “Writer. Gamer. Student. Barista.”  Maybe there wasn’t enough room for “Layabout.” Among his other blogs are Feathers, Cogs and Stars, where he “will be uploading original short stories and poetry roughly once a fortnight.” This lasted three entries before he gave up, though frankly, it’s no bad thing. If you can get through them, you’ve a better stomach for shitty writing than I.

I mention all this, so you know that blogosphere thing is clearly in great hands…

Keogh starts out a long explanation of how he wasn’t going to write about the trailer – is he paid for the word on his blog or something? -then, six paragraphs in, finally gets to the issue: “My problem with this trailer is precisely its sexuality, more specifically its conflation of sexuality with violence.” Okay, let’s talk about tha… Or not. For the writer then heads off into a long discussion of “rape culture” in the video game world, though the examples offered are mostly smack-talk from Gears of Warplayers, whose relevance to the specific case I thought he was discussing is dubious. Give teenage boys headsets and an Internet connection, and you’re somehow surprised they aren’t congratulating opponents on killing them?

I disagree with the whole “rape culture” thing. Those who accept it, see the world through rape-coloured glasses and the results of that vision are unsurprising: Keogh’s statement that, “Videogame culture reinforces rape culture when 99% of videogame protagonists are male.” That’s a statement so entirely filled with delicious wrong, I don’t even know where to start, not least that videogame protagonists are not real. They’re pixels on a screen, and ascribing gender to them in a meaningful way says more about Keogh’s confused view of reality than anything. That aside, 100% of, oh, NFL players are male too. Is that reinforcing rape culture too? Like I said: start seeing the world through rape-colored glasses, and suddenly, everything potentially becomes the “conflation of sexuality with violence” which he abhors.

Now, don’t forget, I still hadn’t actually seen the trailer. But by the time I’d finished Keogh’s piece, I was very keen to see this “rolling in the digital filth”, which left him “embarrassed and ashamed and disgusted to have any part in a videogame culture that produces work like this.” Man, it’s gotta be totally out there, filled with more sexual battery than an Abel Ferrara retrospective. So here you go. 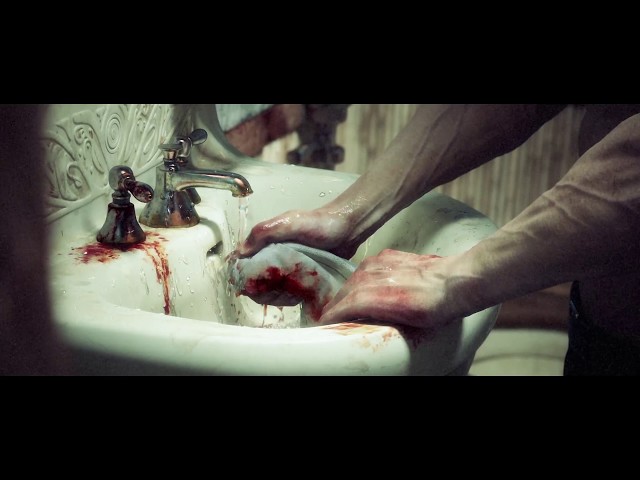 Well. That was underwhelming, wasn’t it?  It reached the end, I looked outside and, yep, civilization appears to be going on about its business. Dodged a (slo-mo) bullet there. Of course, unlike Keogh, I didn’t take the trailer seriously. To me, it was pretty clear that doing so would be a dumb mistake, right from the moment the killer nuns discarded their habits. This is not something that happens in real life, and from that point on, the clip ceased to have the slightest relevance at all to the universe in which I live. Maybe Melbourne is different in this regard, with packs of twisted sisters roaming the streets, launching RPG’s at random motels?

Could be, because this was the impact on Keogh: “It really upset me. Not just infuriated me, but upset me. I lost sleep over this last night.” Really? REALLY? REALLY? If that is truly the case – and it feels more like carefully manufactured outrage than a genuine reaction –  then someone needs to beg, borrow or steal a huge fucking dose of perspective. I saw a hardcore battle in which one bad-ass assassin took on an entire platoon of bad-ass enemies, who were clearly not popping round for a discussion, and prevailed over them. Once battle commenced, that was what mattered. And in support of this, it has been estimated the trailer contains, “Fewer than four seconds with the vaguest of hints of sexualization.” Oh, and I should point out, absolutely no rape whatsoever.

For those four seconds, I’ll defer to Penny Arcade in their assessment:

The cinematic ambitions of the Hitman games have always been prominently displayed on (or very near to) its sleeve; I watched the video to see what the deal was, and they’re playing around with their subtitle in a pulpy, grindhouse vein.  Robert Rodriguez through and through.  It’s fight choreography, and it may set an “erotic” stage but it quickly – and I mean quickly – gives way to a gruesome, life or death, septum obliterating struggle that might be hot for somebody but I suspect that’s a very specific demographic.  Only a necrophile could be titillated by something like this; by the end, it literally defies the viewer to maintain an erection.  As spank material, it leaves something to be desired; specifically, spank material.

That demolished, let’s go back and address Keogh’s earlier argument, that the trailer was… Sorry, what was his argument again? It was so long ago I’ve just about forgo… Ah, here we go: “”My problem with this trailer is precisely its sexuality, more specifically its conflation of sexuality with violence.” I’m not sure what he’s studying, but he appears to have majored in Missing The Point. Because that’s exactly where the “edge” here comes from: the uncomfortable feeling to be found in the juxtaposition of arguably the best and worst things about being human. It’s been that way for ever: I’m no gaming expert, but in cinematic terms, basically the entire girls with guns genre is based on skating the razor-edge of this tension.

The real crux here is not the simple equation suggested by Keogh of “sex + violence”. Even as a non-expert, I can list off any number of video games which have female characters, in costumes you wouldn’t wear to the supermarket, inflicting copious quantities of violence on (largely male) opponents. Next to no controversy have greeted these. The big difference here? The sexual, violent women here lose. It’s an interesting double-standard. Society nods its head at sexual, aggressive even aggressively sexual women…as long as they get what they want. But meet their fire with fire, as the Hitman literally does, and it’s unacceptable.

Is the trailer sexist? Quite probably. But it’s an advertisement for a series of games which, I’m pretty sure, are almost exclusively played by the male sex, from a male perspective, and can hardly be condemned for trying to appeal to the target audience. It’s not called Hitperson after all, and despite the trailer, is not likely to reach the nun demographic. There may be some hippy-dippy land where you can advertise a game about a serial killer character in a bland way, completely incapable of causing offensive in all possible interpretations, that will magically work. But in the real world, you have to grab the viewer’s attention, first and foremost, and on that scale, the trailer rates an absolute 10.

You may or may not buy the game. [By most accounts, it’s nothing like the trailer – which is a shame, I’d say] You may or may not like the trailer. You will remember it, and awareness of the product in question increases, the more the likes of Keogh whine about it. Mission accomplished, level completed. Brandon, you just got pwned like a n00b [as I believe the kids say], by the very people you’re complaining about

As usual, the moral guardians bleat about the wrong thing entirely. If there is a “problem” here – and I’m using quotes advisedly – it’s that the Hitman series encourages the player to identify with a mass murderer, and is far from alone in so doing. Never mind the “rape culture” bogeyman Keogh sees in video games, which requires the viewer to join the dots and make a picture of a penis, out of whatever might be on screen. If there’s an issue, it’s the “murder culture” far more all-pervasive in the genre (and in a pretty “ritualistic” or “fetishistic” way in this particular game) that should be of concern to those worried about such things. Which wouldn’t include me. But the implication of Keogh’s argument is that it would be ok to have the hero mow down dozens of women, as long as they were actual nuns, not sexy fake ones. Hmmm.

I did find interesting this statement, in the very article linked to by Keogh. “Rape culture is using the word “rape” to describe something that has been done to you other than a forced or coerced sex act.” Keogh uses the words “rape” or “raped” 46 times in his piece about an animated trailer for a video game. One which contains no actual sex acts of any kind done to anyone, let alone forced sex. Whoops.jpg. By this definition, the writer is actual part of the very “rape culture” problem he claims to be fighting.

One final irony: less than a week after his rant, Keogh wrote another piece, entitked Bite the bullet: videogames don’t make deadly shooters – however, in his universe, they apparently do make rapists. In that article he concludes, “Videogames are complicated things. No less than films. No less than novels. No less than any other form of media people engage with. It’s about time researchers acknowledged this instead of seeking easy, linear and lazy cause-and-effect models that insult the multitudes of people that play videogames.” Shame he was incapable of following his own advice on his own blog.