I think this year probably marked a new low-water mark for going to the cinema, perhaps since I moved to London in 1987 – largely for economic reasons, as well as the more traditional ones of sloth and the theatrical experience gradually being overtaken by the home one. There are a declining number of films which I feel need to be seen at the multiplex, when the alternative involves soft, fluffy, pillowy goodness, snacks of our choosing and no young people talking incessantly [well, only Robert, and he has spent most of 2008 watching the complete works of Stargate in the living-room]. Why bother going out, when we can wait for it to appear on cable and Tivo it for viewing at our convenience?

Hence, there are probably a number of films which probably would have qualified, yet have yet to drift across our retinas. Much the same way as, say Shoot ‘Em Up and The Bourne Ultimatum would have been in the 2007 Top Ten, had we seen them when we were writing it, this list should be taken as reflecting only the situation at the present time. Quantum of Solace may make it in due course: Twilight and Beverly Hills Chihuahua should probably not be holding their breath though. On the other hand, for the first time in a while (2004 was the last year), I did actually see both the #1 and #2 at the box-office at the movies, though this may reflect their dominance as much as anything. This year, only three films passed $230 million, the smallest number since 2000 [when The Grinch was top, which gives you some idea what a cinematic feast was available there]. I was quite surprised to see Indiana Jones and the Overlong Title was one of them, though the others are likely no surprise.

The top two both made the Trash City top ten too, which is something of a shock, because popular taste and my taste rarely coincide. It’s the first time that’s happened for the #1+2 in takings, since the double-bill of Return of the King and Finding Nemo topped both box-office and TC charts, five years ago. Not quite as strong a correlation in 2008, admittedly, yet anything is better than nothing. So, bearing in mind the limitations of what I haven’t seen yet, here are my favorite ten films of 2008. Links go to the full review, either here or on GirlsWithGuns.org, as appropriate.

10. The Gingerdead Man 2: The Passion of the Crust
Certainly winner of the Title of the Year award, this entertaining B-movie had few pretensions, except for a desire to skewer the world of B-movies: talk about biting the hand. With a sharp, witty script, and a host of cameos from people who should probably know better, this was simply a lot of fun, taking advantages of the strengths that low-budget movies possess, and wisely not reaching beyond those goals.

9. Dark Heart (left)
Sometimes, the best films succeed on the simplest level: the viewer wants to know what happened next. This movie demonstrates this admirably, a taut piece of work, mostly taking place in a deserted house where an Iraqi veteran is taken, after unwisely shooting his mouth off in a bar about a stash of money. ‘Hilarity ensues,’ as they say. Ok: it doesn’t, but the script is crisp and taut, and that’s the most important thing.

8. Iron Man
I haven’t been too impressed with most films based on comics before this year, but we had a couple of crackers in 2008. This one was simply enormous fun, with Downey a perfect choice for the role, and thoroughly deserving the career resurrection which resulted. Expensive, loud and packed with well-shot action, it was a rare example of a film that really needed to be seen at the cinema to be enjoyed.

7. Chocolate
Though if you wanted your action flavoured with copious amounts of bone-crunching, then you needed to unwrap a bar of Chocolate. From the director who turned Tony Jaa into a star, this starred the catchily-named JeeJa Vismistananda as an autistic girl who learns martial arts off the TV. Long story short: contains probably the most painful large-scale fight scene since Jackie Chan’s heyday. And quite a few others too.

6. Diary of the Dead
After the somewhat disappointing Land of the Dead, Romero got back to form, by going back to basics: a small band of no-name actors, pitted against a large number of hungry zombies. George adopted some of the concepts from Blair Witch and Cloverfield, but reined in the worst excesses, and was more effective than both as a result. Skewering the flesh and the media with equal enthusiasm, nice to see Romero still has it in him.

5. Machine Girl
Trust the Japanese to go and one-up Romero when it comes to the splatter. I can’t do much better than repeat my GWG recap: “For those who thought the Black Knight scene in Holy Grail was just too restrained in its use of arterial spray.” Right from the opening scene, the film was awash in the old red stuff; I think it probably counts as the goriest film I’ve seen since the heyday of early Peter Jackson. Silly, over the top, cheap, lurid and wonderful.

4. WALL-E
When the world seems to have turned against you, it’s occasionally comforting to curl up with a feel-good flick – and no-one does them better over the past decade or so, than Pixar. Be it insects, toys, monsters, fish or, as here, robots, the studio can take almost anything, giving it heart and making you care about it, in a way most human actors and directors would kill for. Great to see them back on form.

3. The Bank Job (right)
Jason Statham had a bit of a mixed year. Death Race was lame, and working with Uwe Boll is never a good sign, though even I haven’t had the guts to sit through the 127 minutes of In the Name of the King. However, the #1 British action hero reached a new career-high with The Bank Job, which deftly spun a tale of a largely-forgotten moment in our country’s history, and gave Statham a chance to do some acting, an aspect of his talent often ignored by all but Guy Ritchie.

2. The Dark Knight
Rarely are commercial success and artistic acclaim so well aligned as here; one does have to wonder, would it have been quite so popular in either, save the untimely death of Heath Ledger? Regardless: it is what it is, and what it is is probably the best comic-book adaptation ever [though I still love Batman Returns on a number of levels]. Ledger dominates the screen in a sweeping epic that has brains, heart and soul, overshadowing even Bale’s caped crusader. If someone had given Batman a throat lozenge, this would probably have been #1.

1. Sick Girl
Chris found the trailer for this, and we immediately had to have it for our Film Festival. When we got the DVD, we had some trepidation: surely it couldn’t live up to the trailer? It didn’t. It surpassed the trailer, thanks mostly to Leslie Andrews’ completely disconnected performance in the title role. It’s a film that’s probably highly offensive, simply for daring to make the viewer empathize with a character whose idea of fun includes torture of the most sadistic kind. And we wouldn’t have it any other way. 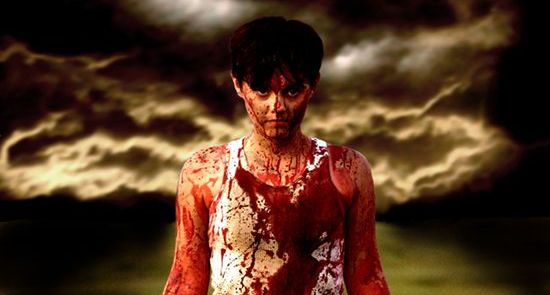