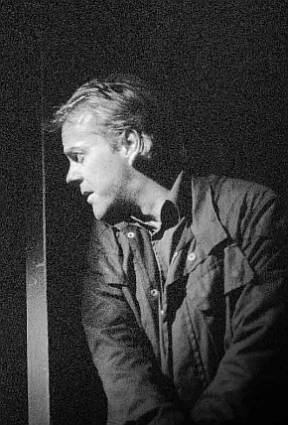 BINK-u…BINK-u…BINK-u…BINK-u… Which is, as near as I can figure it, a phonetic representation of the start of 24, with its relentlessly ticking digital clock*. We missed the show first time through, largely because of Fox’s incessant advertising of it during the 2001 World Series. We watched every pitch, since the Arizona Diamondbacks were playing, but this resulted in a steadily-increasing aversion to all the hype. After all, what was the last decent thing Kiefer Sutherland was in? The Lost Boys? [Ok, we might give him Dark City.]

It thus passed us by, but the second season drew us in, and hooked us completely, becoming the most-anticipated show on television. It was no surprise to find the DVDs of the first series in my stocking in Christmas morning, though if we were being honest, I think it was as much for Chris as me – hey, turnabout’s fair play, I bought her Brotherhood of the Wolf! What was a shock was how fast we got through it, especially given the nine months it took to get through the similarly-sized second season of Buffy. We started at 2pm December 29th; by 11pm on the 31st, we’d gone through all 24 episodes, some 19 hours of TV in less than 2 1/2 days.

The gimmick is, of course, that the show takes place in real time. 24 episodes = 1 day, each representing an hour. If someone takes ten minutes to drive from one location to another, that’s how long they take. Fortunately, there are multiple story threads, which save us from lengthy sequences of Kiefer Sutherland picking his nose in traffic. Central to the story is a plot to assassinate Democratic Presidential nominee David Palmer. At first, this seems straightforward – he is the first black candidate for the office – but as things unravel, it becomes clear that there is a lot more going on. People in his entourage are working against him, and his wife is not prepared to let anything stand in the way of her becoming the First Lady. 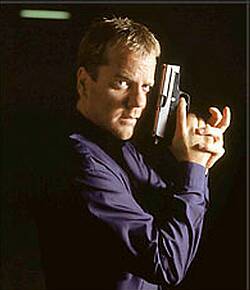 Leading the hunt is Jack Bauer (Sutherland), agent of CTU (Counter Terrorist Unit) who is equally unwilling to let anything – least of all department protocol – stop him from finding the perpetrators. This is made pretty clear early on, when he shoots his boss with a tranquilizer dart and blackmails him in order to extract information. It also becomes apparent that someone inside CTU is not totally loyal either. Oh, and Jack’s wife and daughter have been kidnapped, to coerce him into assisting the assassination. Are we having fun yet?

It’s weird watching season one, only after seeing a good chunk of season two. In some ways, it does weaken the show, because you know who returns, which removes the sense of threat. But in others, it heightens the tension, providing a sense of futility to the struggles of characters who you know are going to die. We now know who is the mole inside CTU – so, in season one, every time the hero interacts with the traitor, we urge him to pull his gun and pump an entire magazine into the treacherous scum. 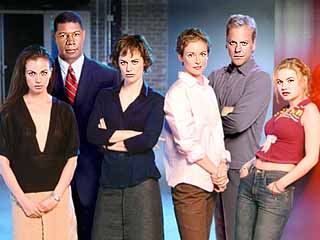 Mind you, some things are refreshingly similar. His daugher is still an irritating and stupid bimbo – the sooner she gets reunited with her mother, the better – and Palmer’s wife remains about as trustworthy as a king cobra with a hangover. The greatest joy of the DVDs is that you don’t need to wait a week for the next one, which was a huge relief, because it is genuinely hard to turn off. We inevitably found ourselves watching “just one more episode”, and returning to season two with 167 hours between installments was an immensely painful experience.

The scripting is great, despite an obviously contrived nature – each episode brings several mini-climaxes, building towards a finale of apocalyptic intensity (it’s remarkable how many exciting events happen at 58 minutes past the hour…). Our favourite was probably the end of #23, where the mole is revealed, yanking the carpet out from under you in truly spectacular fashion. We can only imagine how that felt on the first screening.

If there’s a flaw, it’s in the villains’ plans to assassinate Palmer, which are hideously over-convoluted, and more befitting a Bond villain. They have plants working in the power station where the first attempt is made, but rely on Jack to smuggle in a weapon when the security is at its tightest. Their ability to tap into any CCTV system at short notice is remarkable, and they possess so much technology as to suggest assistance from the Rowell aliens. They can infiltrate federal buildings and personnel. One would imagine they could find less complex methods, that are more likely to succeed. 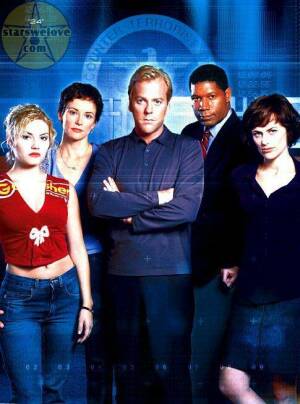 However, the pace is so breathless that such concerns seem trivial, and the acting also helps paper over the cracks too. Special mentions go to Susan Clarke, as the cool, ultra-efficient Nina (who is even better in series 2), Dennis Haysbert as David Palmer (surely heading for a write-in Presidential campaign next year!) and Carlos Bernard as Tony (loyal to a fault, despite his previous differences with Jack). They lend critical support to Sutherland, and help make the show infinitely watchable.

It makes us wonder why there aren’t more films done in similar style – the last one to run minute-for-minute was Nick of Time, an obvious inspiration for 24, with its kidnapped child and omniscient villain. It’s probably a logistical nightmare – imagine the continuity problems of making sure everyone looks exactly the same throughout the months of shooting. But still, suspect we might well now see a slew of them in the wake of this show’s success.

But they’ll be hard pushed to deliver the same amount of excitement and intensity as the first season of 24, right up to the final scene. If the second series can manage to finish on such a high note – well, it was high, unless you were the major character whose cold corpse was discovered therein – we’ll be more than happy.

[* Chris just made it her “You’ve got mail” sound; freakily, guess how many messages she had in her mailbox when she tested it out? Yep – 24…]