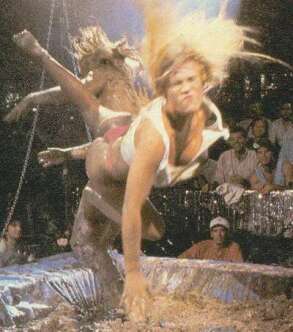 Dir: Penelope Spheeris
While not quite the worst film ever made, Thunder and Mud represents probably the hugest gulf in quality for consecutive movies from the same director. Spheeris’ previous work was The Decline of Western Civilization, Part II: The Metal Years, a film which rivals Spinal Tap for dumb rock excess, yet surpasses it simply by being a documentary. And she’d follow up Thunder with Wayne’s World, which grossed over $120m in the US alone.

Covering somewhat similar territory to both neighbours, Thunder still stands alone as the only movie ever to combine heavy metal with mud wrestling. Why hadn’t anyone thought of this before? Er, because half a millisecond’s thought would have shown the huge potential for disaster perhaps? It’s certainly safe to say that it’s a match-up which will never be seen again. Anyone even considering the idea should simply watch this film, and they’ll drop the idea with the speed of a well-bribed cricketer.

Your hosts for the evening are Sam Mann, Tawn Mastry and Jessica Hahn. The first looks like a washed-up, has-been musician (and as a presenter, often seems to be channelling Ozzy Ozbourne), the second is a local DJ of minor LA renown, while you’re probably going, “I know that name” about the third. And you’d be right. Hahn was the woman who slept with TV-angelist Jim Bakker and brought down his PTL ministry (mind you, if you’ve seen his wife, Tammy-Faye, you can hardly blame the guy). Hahn got over the trauma by getting implants and posing for Playboy. Twice. How this qualifies her as a host is never quite made clear.

If the presenters are inept, talentless buffoons, they seem like icons of professionalism beside the musicians. The running theme throughout the presentation was desperate attempts to prove how macho these guys all are, despite mostly looking like badly made-up drag queens. Rejecting all claims to the contrary, it seems that “glam” probably does stand for “Gay LA Metal” – perhaps the most telling scene cut between the mud-wrestlers in their dressing room, and the bands in theirs. Hard to say who was applying more make-up or had bigger hair.

The format is simple. Each band of the five on display is “championed” by a mud-wrestler; a band plays, two girls battle, winner continues on. Now, I could go on about the unfairness of this – the champion might have to win just one bout, over an opponent who had already fought three times previously – but this is mud-wrestling, not professional boxing. [Though in terms of credibility, they’re about equal.] Matters are not helped much by a ‘commentator’ whose vocabulary appears to be at about the level of a particularly unchallenging Dr. Seuss book.

I do have to say, however, that the mud wrestlers are easily the most convincing performers: the bands all mime, and the hosts have the comedic timing of a pack of permanent markers. We can’t really blame Spheeris, who has said she’s not at ease with comedy (and a cameo appearance by her confirms this); it’s more that the lines are simply not funny. We thus lay the blame mostly at the door of writer Wally Anne Wharton [yes, that’s her name] who also makes an appearance as the ‘manager’ of the wrestlers. Their federation initials are M.U.F.F. Oh, hold my aching sides, I fear they may split…

With about 20 minutes of mud-wrestling, and perhaps the same of ‘performances’, this leaves around 50 minutes to be filled with totally dire comic skits. This includes protests by a group of fundamentalist Christians from the group U.P.T.I.G.H.T, attempts by a trio of skanks to whine their way in for free, sexual harassment for comedic effect, and – worst of all – monologues by ‘Barbi the Bimbo’, who spouts such drivel as, “I must be telepathetic”. Half right, Barbi, half right… If I didn’t know better, I’d say she was played by Linnea Quigley, but none of the names in the end credits rang any immediate bells, and there’s absolutely no way I’m going back to check.

The sole moment of wit in the whole thing is after one wrestler quits after having her top accidentally torn off. We’ll take at least four sets of quotes in that sentence as read, shall we? One of the replacement wrestlers is Big Bad Mama, who must be 200 pounds at least. Fighting for She-Rok, the all-female band (who are, sadly, just as shallow and cliched as their male brethren), Mama wins, in a moment of cheering defiance to the relentless parade of moronic stereotypes inflicted on us over the past 90 minutes. And that was just the audience – though did we spot Dennis Quaid, looking rather shamefaced? As a final highlight, they wheeled out Bill Gazzara, veteran Sunset Strip promoter of everyone from The Doors to Van Halen. He was looking even more near death than usual (he’d eventually peg it a couple of years later), which made his lecherous comments about the girls even creepier. 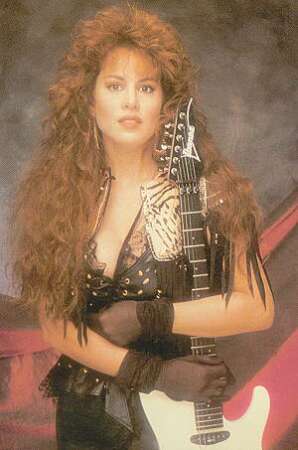 Where are they now? A little detective work (okay, 5 minutes on a search engine) revealed the following:

But wait! There’s more! A January 2006 email from Heather Harris sheds some light on She-Rok.

“The photo you offer to illustrate the band She Rok actually depicts Jessica Hahn, co-MC to the film with musician Sam Mann. She had topical frisson at the time due to her defection from the evangelical ranks, courtesy of her involvement with a well-known, adulterous minister.

Although many of the bands in the movie are deservedly forgotten, She Rok should not be lumped in with them. They were the best of the all-female metal bands of the era, courtesy of better instrumentalists than many signed female metal acts such as Vixen or Girlschool. Guitarist Geri Etinger can be viewed in the film peeling out her trade Van Halen-worthy technique, and 2 other members had musical notoriety outside the band’s ranks as well.

Singer Emi Canyn became one of Motley Crue’s Nasty Habits, the backup singers who exuded their own personalities despite the cliches of the Metal era, and She Rok bassist Mary Kay was co-founder of Detroit’s legendary proto-punk band The Dogs. She’s still onstage playing with Kanary, a band with Precious Metal’s Leslie Knauer, and remains as pretty today as my photos of the filming below indicate. The film was silly fun, and is quite representative of the 1980’s hair metal daze in Los Angeles. Perhaps this info and my photos will make viewing this curio more fun to your readers.”

The mighty SHE ROK in Thunder & Mud
Photos (C) 2006 Heather Harris – used by permission, not for further reproduction or linking.

The non-musicians involved with Thunder & Mud seem deeply embarrassed, save for Quaisha, the girl who had her top torn off, who still seems be working happily in the field fourteen years later. Mastry, last heard of as a DJ in Minneapolis, says simply, “I sucked”, while Spheeris, in an Onion interview described it as, “A flaming piece of crap”. She also doesn’t believe she ever got paid for it – somehow, a more fitting epitaph for this monument to 80’s metal is hard to imagine. Some things about that decade truly are best left forgotten… 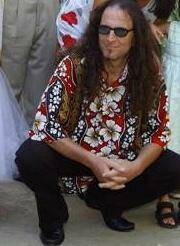 [A reader writes: “I don’t know who wrote the review of the Penelope Spheeris project, Thunder And Mud, but I just wanted to say how much I enjoyed it. I remember some funny sequences in the video, and your reviewer helped remind me of some others. By the way, Sam Mann (left) is alive and well in Hollywood, CA, splitting his time between his band ‘RAM’ and DJing at a Mexican bikini bar in downtown Los Angeles called Alameda Strip.”]