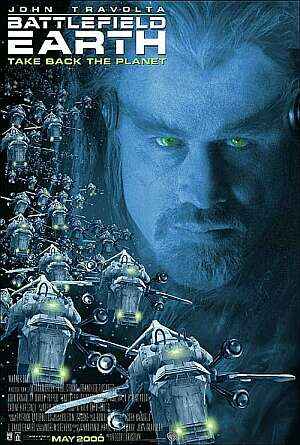 I just wouldn’t let it lie. I wouldn’t take a telling. No less a person than my fiancee said this was, “the most awful film I think it has been my utter displeasure to have attended in my entire life”. I should have trusted her. I’m very, very sorry. The trailer goes, “If you think you’ve known fear… If you think you’ve faced pain…”, and there is an overwhelming urge to chime in, “You clearly haven’t had to sit through Battlefield Earth“. This is truly bad: I suspect its biggest fan is probably Paul Verhoeven, since no-one will ever speak ill of Showgirls again.

It doesn’t actually begin too badly, though I don’t know about man being an endangered species, as the opening text claims – it’s John Travolta’s career that’s about to be put in extreme peril. In the year 3000, humanity has been reduced to a primeval state, harbouring vague memories of civilization, gods and demons. We can tell it’s primeval, because all the men look like Swampy. Hell, all the women look like Swampy. Our hero, Jonnie (Pepper, in his last starring role – trust me on this one) leaves the sanctuary of the mountains to find these mythical gods in a ruined city. I have to say, the effects and sets are excellent, and I was wondering if this was perhaps more a misunderstood gem.

How wrong I was. For then the invading alien race, the Psychlos, turn up and start firing. For some reason, the movie suddenly acquires a virulent green tint, the first of many totally gratuitous filters director Christian puts in front of the camera. Green, blue, orange – even more than one in the same shot. And when he hasn’t got out his Crayolas, he’s tilting the camera: initially, it didn’t make much difference since, hey, mountains are kind of tilty anyway, but this gets old fast on any level playing-field. The drinking game for this movie should involve taking a swig each time the camera moves off the horizontal: should ensure oblivion is reached by about 30 minutes, a best-case scenario for any viewer.

Anyway, Jonnie gets captured, pausing only to crash through a succession of plate-glass windows, all remarkably intact, despite the passage of enough time for cities to crumble. His attempts to escape bring him into contact – literally – with Terl (Travolta), the Psychlo security officer who is mean and grumpy even when he isn’t stuck on Earth “with endless options for renewal”, after being caught shagging a senator’s daughter. Bizarrely, there’s much in the film that revolves around office politics of the most banal sort, which is wildly out of place in a supposed SF-action pic.

“In order to feel safer on his private jet, John Travolta has purchased a bomb-sniffing dog. Unfortunately for the actor, the dog came six movies too late”
Tina Fey, Saturday Night Live

Hard to say which is worse, Travolta’s appearance or his acting. Things the movies teach us, #391: it is hard to exude menace, when you have tubes stuck up both your nostrils. And that’s excluding Terl’s funky dreads and the platform soles, clearly intended to increase his stature, but which actually make him resemble a former member of Slade as he clomps around. Travolta’s performance is no more comfortable, and would be barely acceptable as a pantomime villain at the Fairfield Halls, Croydon. 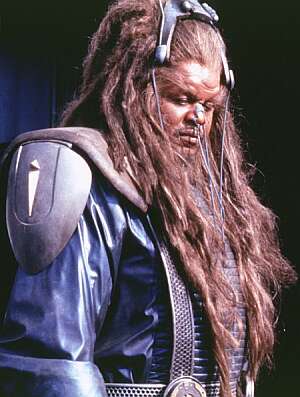 Our hero, meanwhile, is stuck with the other “man-animals” and fed something green and lumpy; it must be good, as a fight breaks out over its distribution, albeit only so Jonnie can give the “we humans have to stick together” speech. Terl, meanwhile, has his own plans. The Psychlos came to Earth in search of gold (coincidentally, also a rare element on their planet), and he wants to use humans to operate the mining machinery, which would be a breach of the rules. He also lets Jonnie and two colleagues out, purely in order to find out what humans like most to eat – I guess asking them would have been too much trouble – and comes to the conclusion that it’s rat.

He plugs Jonnie into a learning machine, force-feeding him, not just the knowledge necessary to work the machinery, but the entire Encyclopedia Galactica, including the bits on military technology. Oops. If Terl is supposed to be one of the elite, you wonder how such a dumb species ever discovered the wheel, never mind interstellar teleportation. He then brings Jonnie to the destroyed Denver public library, just to emphasise that knowledge is useless. Jonnie picks up from the rubble…well, for one glorious moment, I thought it was going to be a copy of L.Ron Hubbard’s Dianetics, but it’s even more cliched – the Declaration of Independence.

Terl can’t survive outdoors because radiation makes the atmosphere the Psychlos breath explode [This an Important Plot Point, once you can get past wondering about the dubious physics involved]. So he leaves Jonnie and his crew to mine for two weeks and wanders off. Jonnie uses his new-found knowledge instead to sprint around the United States, dropping off local cavemen at flight simulators so they can learn to fly fighter jets [miraculously still in working order after a thousand years or so], picking up nuclear bombs, oh, and looting gold from Fort Knox. Terl, of course, barely questions why his gold mine is miraculously producing bullion bars, probably stamped, “Property of US Government”.

Jonnie kicks off the revolt, and then…to be honest, I’m not sure what happens, exactly, as the story is edited in such a way as to border on the incoherent. Must have been damn fine flight simulators though, as the cavemen are now flying like Tom Cruise on amphetamines. The nuclear bomb is snuck through the teleportation gateway to the Psychlos home planet, where it blows up, causing the entire atmosphere to go with it. Kinda lucky such an unstable planet had survived the four billion years necessary to evolve intelligent life.

Terl meanwhile, gets his arm blown off – reacting with much the same depth of emotion you’d get if someone told him there was a thread on his suit jacket – and is kept hostage by Jonnie for reasons which remain unclear to this day. Estimated cost: $73m. American box-office: $21m. Watching John Travolta’s smug Scientologist face as his career goes down the plughole: priceless.

It’s impossible to list all the ways in which this film is jaw-droppingly awful. The plot makes no sense, the acting is awful, the direction woeful. I’ve read the original novel (hey, so shoot me) and it’s actually not bad, or at least not disastrous, in a pulp SF kinda way. Its miserable box-office doesn’t tell the whole tale, since it’s widely known that Scientologists were asked to go and see the movie multiple times on the first weekend. About the only thing in its favour is that, while I’ve no doubt Hubbard’s name is largely what got Travolta interested, it surely is too bad to contain any kind of cult-indoctrination message.

Rottentomatoes.com lists the final critical score at 69-4 against, an unprecedented tidal wave of hate. The Battlefield Earth FAQ goes even further, cherrypicking the bad ones. Believe the hype on this one: it’s every bit as poor as you imagined, and then some.