You know you’re in California when every piece of electrical apparatus, from automatic doors to lifts, has instructions on it detailing what to do when the power fails. Fortunately, the Los Angeles Film Festival was mercifully spared any of the rolling blackouts which been all too common in the state recently – the thought of projecting movies by pulling the film past a candle really doesn’t bear thinking about.

This year, the film was incorporated into part of the Independent Feature Project/West, a strangely named group looking after indie film-makers and cheerleading for their movies. One was left to contemplate the significance of the logo – as seen at the top. This portrays someone desperately pushing a film reel up a very steep slope, which is a good enough metaphor for the process of movie-making by all accounts. The fact that, at the top, there appears to be nothing but a precipice is presumably a good enough metaphor for the eventual fate of most non-studio product. Is that a Blockbuster video card lurking at the bottom?

The nine day festival had over ninety films, but due to time constraints we could only sample a few, opting (as you might expect) for the ones that didn’t involve powerful coming-of-age sagas, poignant and sometimes hilarious stories about what happens when life moves on, or fresh takes on the subject of sex and the single girl. [All three could be found in the festival program] For what’s the point of being independent if you’re going to churn out the same kind of thing as a mediocre movie-of-the-week on a mainstream cable channel? Thanks, but we’ll pass. 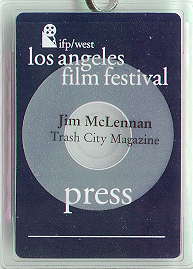 Most of the screenings took place at the Directors’ Guild of America headquarters on Sunset Boulevard. Naturally, I took the chance to play at being Spielberg, striding into the building, barking loudly into a cellphone about weekend grosses and pay-for-play deals. I think my poor mother was very confused by the end of the conversation, but never mind. The screening rooms were fine, if a little spartan – I mean, no drinks-holders, and while they sold food in the foyer (this being California, it was sushi and cappucino rather than popcorn and Coke), they wouldn’t let you take anything into the screens. So much for the cinematic experience. Still, nothing that couldn’t be solved, thanks to a capacious hockey-shirt, capable of holding an entire picnic in its sleeves. 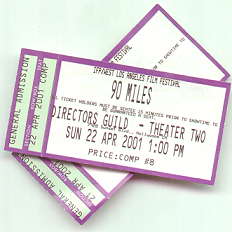 The LA Film School and the Laemmle Sunset 5 also provided venues, though we never got to the latter, presumably because it was playing the kind of fodder appropriate to its multiplex nature. The Film School was further along Sunset Boulevard, with the cinema tucked round the corner in a low-key manner inappropriate for anything to do with film schools, but we did discover a really decent BBQ joint up the street which helped keep those of us less keen on sushi nutritionally sustained.

The big buzzwords at the festival appeared to be “digital video”, with several of the screenings coming off this medium, yet looking barely inferior to regular projection. People like Bernard (Paperhouse) Rose are extremely enthusiastic about its possibilities, and with good packages available for just a few thousand dollars, it does seem to offer low-budget film-makers a great deal of flexibility and possibility. Disturbingly for those in the business, it may eventually also mean an end to the need for special lighting, cinematographers and a lot of the other paraphenalia traditionally associated with “movie making”. We script-writers, however, should be safe. 🙂 For an example of the possibilities, check out www.filmisdead.com.

But enough of such technical issues! Film festivals are, after all, about the films. So, without further ado, I’ll point you in the direction of the reviews, while I keep on trying to discover how I can get a Trash City star on the Hollywood Walk of Fame…