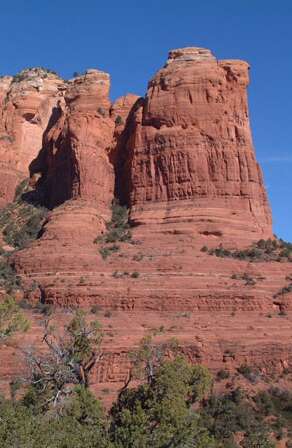 Up until the 1980’s, Sedona was just another northern Arizona town, set in a picturesque location among impressive formations of red rocks. Passing tourists and the odd film shoot (The Angel and the Badman) provided minor sources of income, while agriculture remained the main pursuit. However, in the 1980’s, a whole new group of visitors arrived, enticed by Sedona’s vortices. Or vortexes – like most things related to them, there’s no real agreement on the matter.

Indeed, you’d be hard-pushed to find two people who agree what these vortices are. Generally, they seem to be areas of increased energy, which can be felt by the especially sensitive – cynics may suggest this is just a nice get-out clause, allowing any failures to be blamed on the participant. From this humble beginning has spun off an entire industry of tours, seminars and New Age activities, which has turned Sedona into a Mecca for the spiritually-minded. Now, anywhere between 2 and 4 million tourists visit a year, swamping the year-round population of barely 10,000.

We are not equipped to comment on the vortices, since we’ve never bothered to hike our way to their supposed locations – with an appalling lack of consideration for tourists, there are no vortices located on Main Street, or near to Starbuck’s. Sedona does, however, remain a cutesy little destination that’s an inevitable stop on the itinerary of visiting guest, as well as the occasional weekend getaway for Chris and myself. It seems like every second shop is an art gallery – with the ones in between occupied by gift shops or new age stores, selling crystals, psychic readings, aura cleansings and the like. 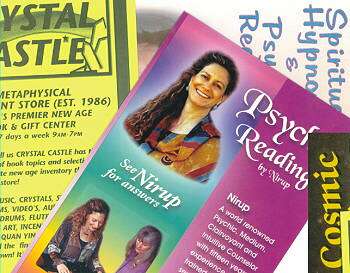 Coming out of one such, we were grabbed by a guru who demanded, “What’s the connection?”. Connection? Ah, spiritual. Now, Chris is from New York, and I spent a decade in London, where strangers only talk to you if they want cash. This guy seemed more benign, though he may have been angling for business. He said we both need exercise – hardly a stretch, and true for 90% of Americans. I need to watch the water I drink, Chris should get her acupuncture points adjusted. Maybe she can do it at the garage, when she takes the car in for a service.

It wasn’t all holistic fun and games, however – the main purpose of the Sedona trip was to hear a talk by Dr. Nick Begich. We first encountered Begich at the 2002 Conspiracy Con, and he remains one of the best speakers we’ve heard in our three years attending that event. It says something that a ninety-minute drive to hear him once more, was absolutely no discouragement at all.

Dr. Begich differs from many conspiratorial researchers in a couple of ways. Firstly, he cites sources with a zeal that borders on the obsessive, yet is refreshing – compare and contrast Arizona Wilder, whose claimed experiences are her only evidence. Secondly, too many conspiratologists take a fact and run amok with it, ending up in wild speculation. Begich is happy to admit the limits of his knowledge, and differentiates between knowledge, inference and extrapolation.

His family background is interesting: his brother is the mayor of Anchorage, Alaska and he’s the son of an Alaskan Congressman who disappeared, along with his plane, in mysterious circumstances – also on the vanished aircraft was House Majority Leader Hale Boggs, a member of the Warren Commission which investigated the assassination of Kennedy, and announced that Lee Harvey Oswald acted alone. Begich entered the fray with a 1994 article about the hi-tech HAARP project located in a remote area of Alaska, a topic later explored more fully in his book, Angels Don’t Play This HAARP.

The HAARP array in Alaska [click picture to enlarge]

HAARP stands for ‘High Frequency Active Auroral Research Program’, and was originally developed as a way to use some of the Alaskan gas there, rather than needing to transport it elsewhere. It consists of an array of radio antennas, pumping large amounts of energy into the upper atmosphere, in what is officially “a scientific endeavor aimed at studying the properties and behavior of the ionosphere.” The fact that it’s run by the Air Force Research Laboratory and the Office of Naval Research tells you this is no theoretical research project, though the only practical applications officially admitted are in communication and navigation systems. Progressing roughly from the mundane on out: 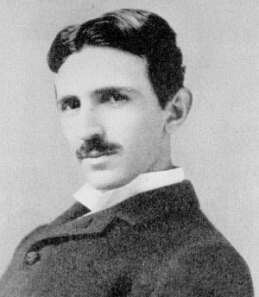 The last-named deserves – and requires – a longer explanation, and a diversion into the realm of electromagnetic weaponry, which may be as much a revolution in armaments as the invention of gunpowder. An earlier pioneer was Nikola Tesla (left), who worked on various devices in this field as well as particle-beam weapons; some suggest one experiment caused the still-mysterious Tunguska Event of 1908 which levelled half a million acres in Siberia, but didn’t leave the crater typical of a meteor impact. After his death in 1943, all Tesla’s papers were seized by the U.S. government.

The human body is susceptible, in one way or another, to a wide range of radiation: ultraviolet rays lead to sunburn, gamma rays cause cancer, and so on. More subtle is the potential impact on the brain: in December 1997, a sequence of flashing lights in a Pokemon episode landed 600+ Japanese viewers in hospital with an epilepsy-like syndrome [thousands more claimed some effects, but mass hysteria is likely responsible for most of these]. This shows that the right frequency of stimulation is more important than the power.

Another example is cellphone radiation. The jury is out on whether the energy levels there pose a threat to users’ health but, either way, information on the topic is hard to find. Emission figures for each model tend to be locked deep within the instruction manuals, sealed in the box, rather than anywhere that’d let consumers make an informed decision. After the lecture, Chris enquired at four local stores on the topic – three were unwilling to help at all (T-Mobile were particularly hostile), with only Digitell providing assistance. Hardly the behaviour of an industry with nothing to hide. 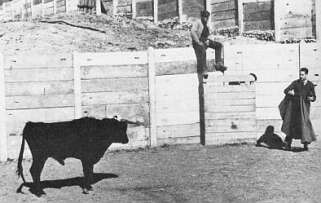 In a showy but undeniably impressive 1964 experiment (right), Dr. Jose Delgado stopped a charging bull using a transmitter connected to a receiver surgically implanted in the beast. This was reported in his book, Physical Control of the Mind, where he also called ethical objections to physical mind-control, “debatable” [p.214]. Without such moral qualms as a hindrance, one can only guess what progress has been made in classified research during the forty years since this open demonstration.

Admittedly, there could be benefits to come out of this area as well. A better understanding of how the mind works, and ways of changing it, could lead to improved methods of alleviating mental illness. Or perhaps we could treat ADD-affected children by methods other than pouring a cocktail of pharmaceuticals down their throat. But the possibilities for abuse need hardly be spelled out, beginning with trivial examples such as a vending machine which could ‘beam’ an advertisement into the heads of passers-by – again, we can speculate what the military have done with this technology.

HAARP fits into this, because the ELF frequencies which it generates in the ionosphere are around the same ones found in the human body, and can impact it. Dr. Rauscher found that a certain frequency could generate nausea, while another triggered laughter. She once reportedly said, “Give me the money and three months, and I’ll be able to affect the behavior of eighty percent of the people in this town without their knowing it.” Imagine the impact of this on an opponent – it certainly might explain why the Iraqi army caved so easily during the two Gulf Wars.

You might question whether some obscure scientific endeavour in the middle of nowhere is really of significance. But as Dr. Begich pointed out, technology is largely what distinguishes the “have” nations from the “have nots”, and it is our responsibility to ensure that our governments are not using it in an irresponsible manner. I feel somewhat less than comfortable that this is taking place, especially while projects like HAARP continue under the financial control of the military, and with imperfect disclosure.